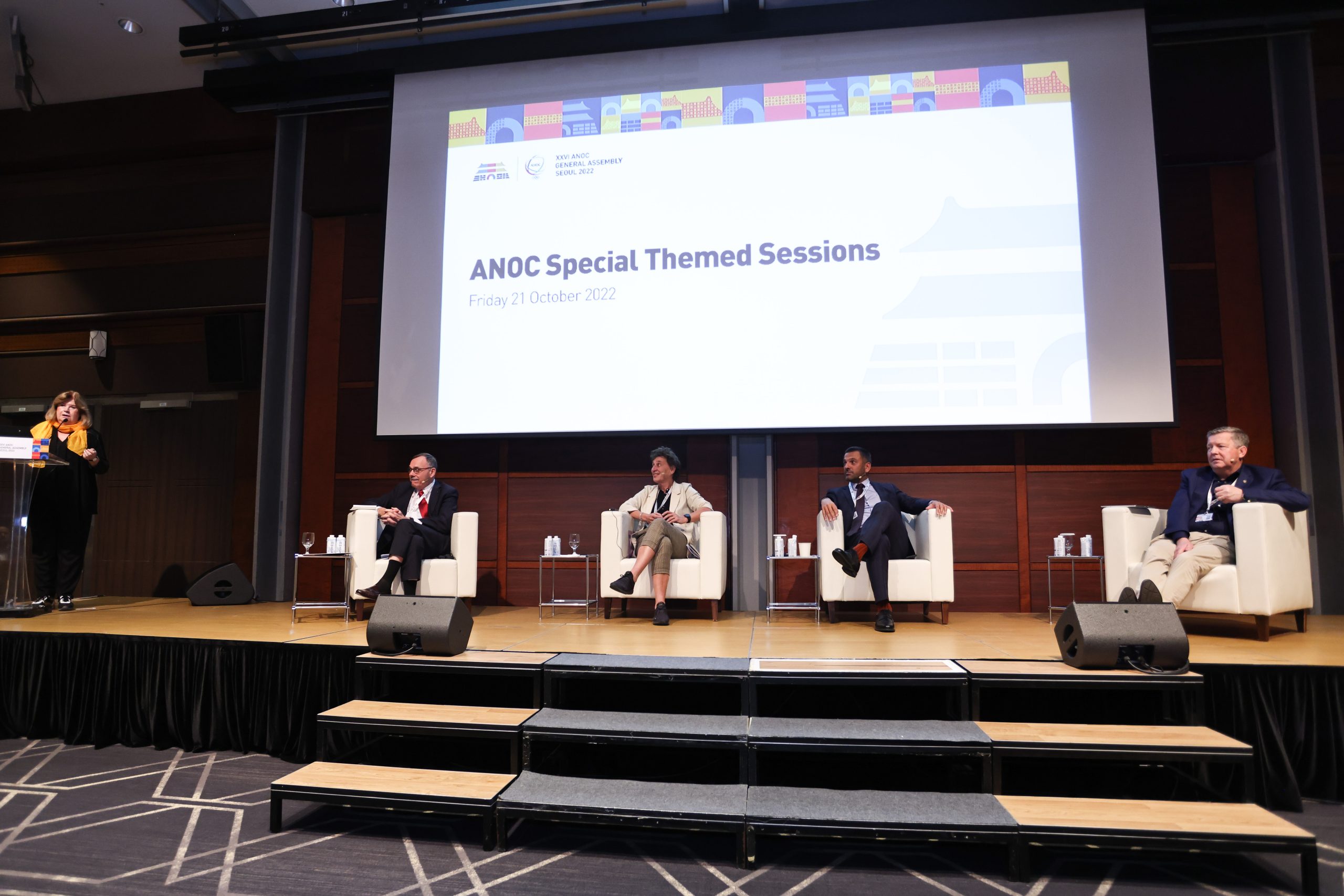 It was the first time that ANOC has hosted theme sessions of this kind during the ANOC General Assembly. Feedback from NOCs was very positive as the sessions provided a platform for the NOC family to learn and share information.

The first theme session was on sustainability in sport and moderated by Damian Foxall from The Toolbox, who ANOC has partnered with to provide NOCs with free access to tools and guides on how to develop sustainability strategies. Foxall called on all NOCs to be superheroes and consider how they can embed sustainability into their work and on a local, regional and national level. In conclusion, Foxall encouraged NOCs to take clear and bold actions. Leonardo Cunha from the NOC of Cape Verde presented a case study on how his NOC has implemented simple and cost-effective measures to build and run a sustainable headquarters. ANOC Executive Council member and Canadian Olympic Committee President Tricia Smith spoke of how her NOC is focused on two key areas: improving sustainable practices within their organisation and also empowering athletes as advocates for sustainable change.

Stephanie Gerresten, a Campaign Coordinator for the UN Clean Seas programme presented on the scale and severity of plastic pollution and what sports can do to address this problem within their own organisations. ANOC has recently partnered with Clean Seas to promote the campaign and implement plastic reducing initiatives within its operations and at events. Following the presentations of the panellists the floor was opened for an interactive discussions and Q&A.

The second theme session looked at how to protect integrity in sport. The panel was moderated by ANOC Legal Commission Chair Michael Chambers who presented on integrity in sport and how it needs to be safeguarded.

President of the NOCNSF van Zanen-Nieberg spoke of the how they try to combat match fixing in The Netherlands with an emphasis on prevention, awareness building, advice, investigation and sanctioning. General Director João Paulo Almeida explained that the Portuguese Olympic Committee take a similar approach with a three pillar process involving awareness and prevention, regulation, and cooperation intelligence.  He explained that no matter the size of the NOCs or resources it is always possible to take positive action. CEO of the Australian Committee Matt Caroll rounded off the presentations with an emphasis on the importance of engagement when attempting to combat match fixing. He spoke of the role families of athletes can play and how vital collaboration with the Athletes’ Commission is in disseminating information. A lively discussion followed the presentations.

The two sessions were held as part of ANOC’s ongoing commitment to facilitating knowledge-transfer and the exchange of best practice among NOCs, in line with the ANOC Strategic Plan.

NOCs invited to register for Workshop on Writing for Social Media

ANOC has opened registration for the latest NOC Social Media Workshop which will focus on providing NOCs with the skills[..]