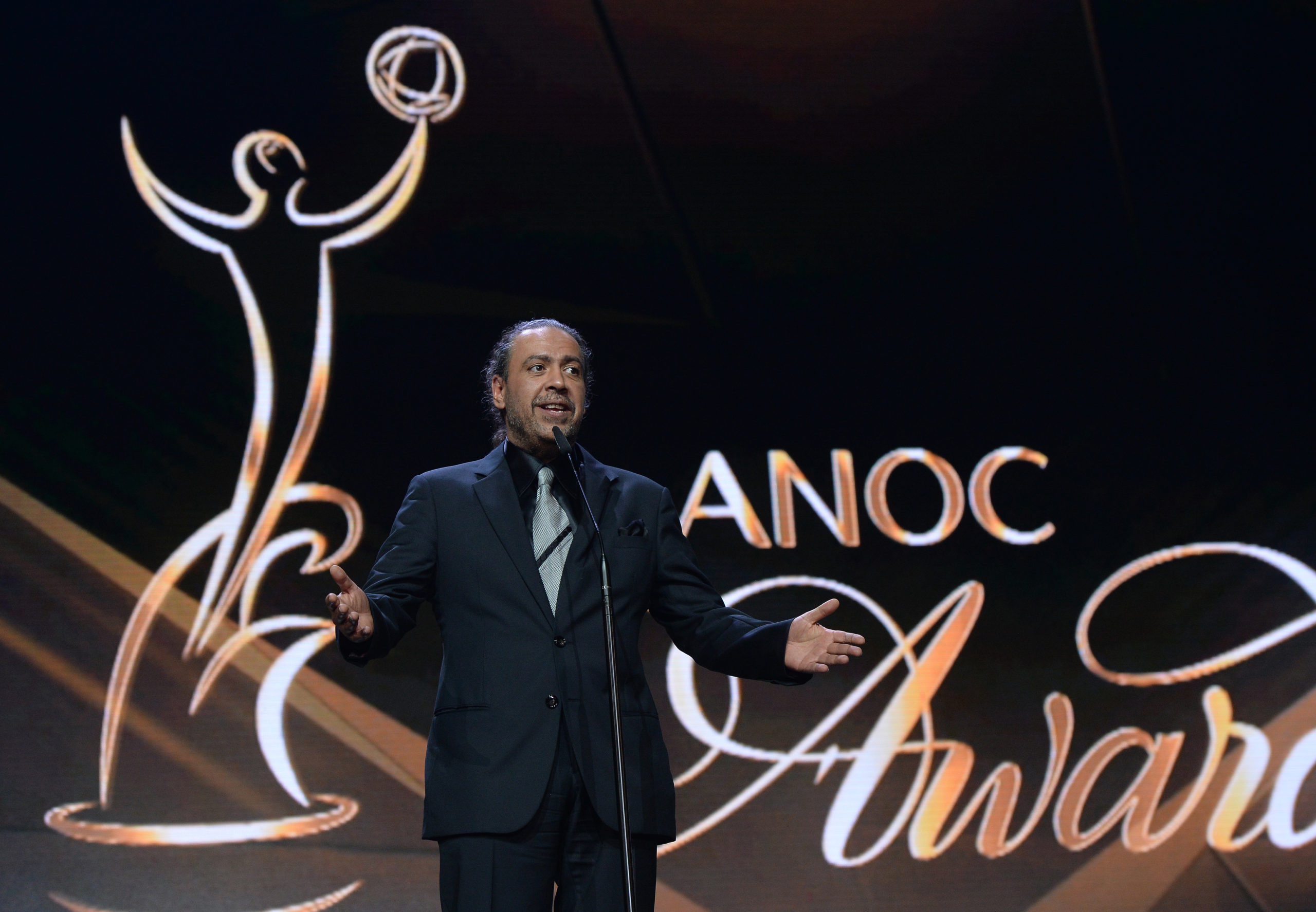 Prague, Czech Republic; 2 November 2017: The spectacular ANOC Awards 2017 took place at the Forum Karlin in Prague tonight, celebrating the best male and best female athletes of all five continents for their exceptional sporting achievements throughout the year.

The fantastic fourth edition of the event, organised by the Czech Olympic Committee, showed sport’s power to unite different nations and cultures, and reflected ANOC’s gratitude to the NOCs for their commitment and dedication throughout the year. The awards ceremony was broadcast by Czech TV, distributed to broadcasters all around the world, and streamed live on the ANOC YouTube Channel, enabling the entire sporting world to enjoy the breath-taking combination of sport and culture on show. Athletes, NOCs and International Federations were actively engaged with ANOC across all social media platforms throughout the evening.

The ANOC Awards winners for best male and best female athlete from each continent were:

“It has been another fantastic year of sport all around the world. We have been lucky enough to witness some incredible sporting moments. The athletes and their respective NOCs and International Federations are at the very heart of the Olympic Movement and it is their dedication that we see year-on-year that helps create the amazing memories we have celebrated tonight. I would like once more to congratulate all of the deserved award winners and their NOCs, for their outstanding contributions to the Olympic Movement.

“I would like to offer the Czech Olympic Committee my warmest thanks for making the fourth edition of the ANOC awards yet another exceptional evening. I am grateful as always for the opportunity to thank and repay the world’s NOCs for all they have given to the Olympic Movement this year.”

The award winners were selected by the ANOC Jury, which comprises of representatives from each of the Continental Associations, the ANOC Athletes’ Commission Chair, ASOIF President, AIOWF President and ANOC Secretary General. The decision was made when the Jury met in September. 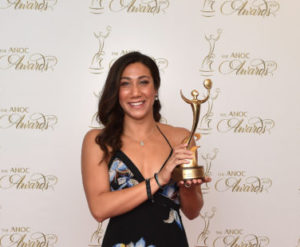 Farida Osman (Egypt, swimming), recipient of the ANOC Award for Best Female Athlete from Africa 2017, said:
“To be presented with this award in the company of so many inspiring people is a memory that will stay with me forever. 2017 has been a great year for me, especially the historic moment of winning Egypt’s first ever medal at the FINA World Championships. I am extremely proud to have set a new African 50m butterfly record when I won the bronze medal in Budapest, and I am determined to continue to work hard, improve, and become an inspiration for future athletes.” 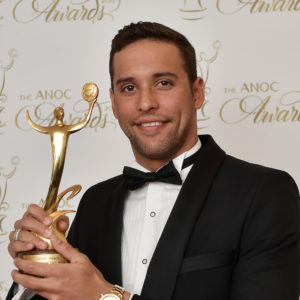 Chad Le Clos (South Africa, swimming), recipient of the ANOC Award for Best Male from Athlete Africa 2017, said:
“I am incredibly proud to represent my country and continent at the ANOC Awards. After a difficult year last year in my personal life, I am really pleased with my results this year and was delighted to come back and win gold in the 200m butterfly at the FINA World Championships in Budapest. Sport in Africa is going from strength to strength, so I am humbled and honoured to win ANOC Award for Best Male Athlete from Africa. I hope I can use this award as a platform to inspire further sporting development throughout the continent.” 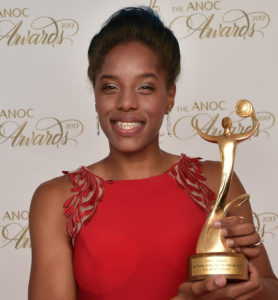 Yulimar Rojas (Venezuela, athletics) recipient of the ANOC Award for Best Female Athlete from the Americas 2017, said:
“Winning gold in the triple jump at the 2017 IAAF World Championships in London was incredibly special, especially given that it was Venezuela’s first ever IAAF World Championship title, and it is a memory that will last with me forever. It has been a really special year for me, capped off by the honour of receiving the ANOC Award for Best Female Athlete Americas. It is amazing to see all 206 NOCs come together here in Prague to celebrate this year’s best sporting moments. Sport has the power to unite people and I hope in the future it can play a role in bringing peace to my country.” 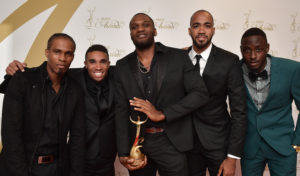 Jarrin Solomon, who accepted the ANOC Award for Best Male Athlete from the Americas 2017 on behalf of Trinidad and Tobago 4 x 400 team, said:
“Heading into the 2017 IAAF World Championships in London, we truly believed we were going to leave with the gold medal. In spite of this, to be the first team to beat the USA in the men’s 4x400m since 2003 is a remarkable story, and one that we will telling for the rest of our lives. We are very proud to be recognised by ANOC with the Best Male Athlete from the Americas award, and would like to say thank you for such an enjoyable celebration tonight in Prague.”

Yu Song (China, judo), recipient of the ANOC Award for Best Female Athlete from Asia 2017, said:
“The past few years have shown me the benefits of hard work and dedication and to win gold in the +78kg category at the 2017 World Judo Championships in Budapest, my second consecutive world title, was the highlight of my career. I am truly grateful to ANOC for recognising me as Best Female Athlete from Asia and I hope this award, and my success in sport, can inspire others to follow their dreams and achieve great things.”

Mutaz Essa Barshim (Qatar, athletics), recipient of the ANOC Award for Best Male Athlete from Asia 2017, said:
“I am truly honoured to be presented with this award, which marks the perfect end to my most memorable year in athletics to date. Winning the high jump gold medal at the 2017 IAAF World Championships in London is one of my proudest achievements in sport and I hope my success can be an inspiration to young, aspiring athletes in Qatar and throughout Asia.”

Sarah Sjöström (Sweden, swimming), recipient of the ANOC Award for Best Female Athlete from Europe 2017, said:
“I am thrilled to receive this award, it is great honour and I am flattered to be recognised for my achievements this year at such an esteemed event. I would like to thank ANOC for this award and for organising such a wonderful celebration in Prague. To win three gold medals and one silver medal at the FINA World Championships, set two world records, one Swedish national record and be awarded FINA Female Swimmer of the Meet in Budapest, has made 2017 a really special year for me.” 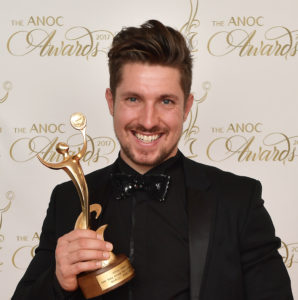 Marcel Hirscher (Austria, alpine skiing), recipient of the ANOC Award for Best Male Athlete from Europe 2017, said:
“It is a privilege to receive this prestigious honour at the ANOC Gala Awards in Prague. To be recognised by ANOC as the best male athlete in Europe, a continent where there is an abundance of sporting talent, means a huge amount to me. To win two gold medals at the Alpine Skiing World Championships, as well as my sixth consecutive World Cup, has made 2017 an unforgettable year. It has been great preparation for the Olympic Winter Games next year in PyeongChang, where I hope to continue my good form and win my first Olympic gold medal.” 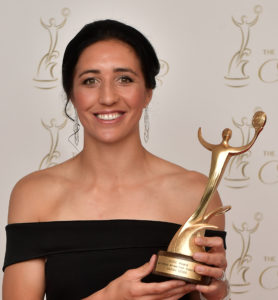 Sarah Goss (New Zealand, rugby sevens), recipient of the ANOC Award for Best Female Athlete from Oceania 2017, said:
“I am extremely proud to have captained the Black Ferns to victory in HSBC Women’s Sevens World Series this year, and I am honoured for this achievement to be recognised by the individual ANOC Award for Best Female Athlete Oceania. I have my teammates to thank for this award as they are the ones who support me on and off the pitch all year round, so really this is an award for all of them too. We have a great spirit in the squad at the moment and I am confident we can build on this year’s momentum and accomplish great things.” 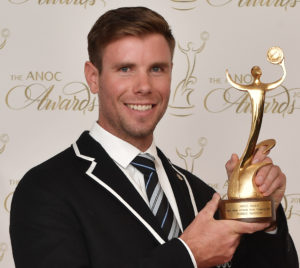 Robbie Manson (New Zealand, rowing), recipient of the ANOC Award for Best Male Athlete from Oceania 2017, said:
“To set a world record in Poland this year is something I will never forget. New Zealand has a proud history of strong single scullers, which I am very proud to be part of. I am determined to keep on improving and be remembered as one of the greats of the sport. I want to thank ANOC for this prestigious award, it is a great honour to be recognised here in Prague alongside some of the world’s best athletes.”