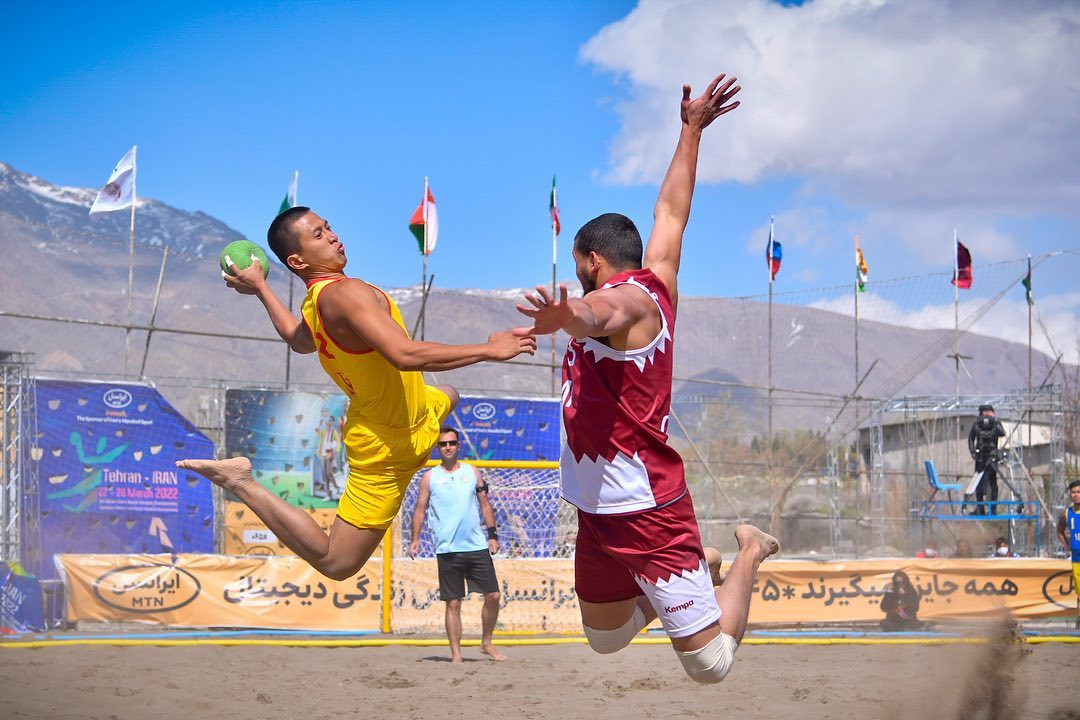 All previous match results left it to all come down to the very last match of the championship – match number 15. A win for Qatar would have seen them crowned champions for the sixth consecutive event, and Iran, Oman and Vietnam all tied on points with maths needed to determine second place – an important position, with the top two spots qualifying for the 2022 IHF Men’s Beach Handball Championship in Greece this June.

In the end, Iran caused a major upset, taking a shoot-out 12:10 to beat Qatar 2-1, thanks to a save by Iranian goalkeeper Abbas Asad Zadeh from Qatar’s Amir Debguir. Oman, who have finished as runners-up to Qatar for the past five editions, could only manage the fourth place, being beaten by Vietnam on the head-to-head.

“Qatar has won Asian gold for ten years and has been the undisputed champion of Asia in the last five editions,” explained Iran coach Seyed Hassan Eftekhari to IRIHF.ir.

“It is a very big team in the world, but we were able to win against this powerful team. Iran’s beach handball team has achieved this with many years of hard work with the handball federation, the beach handball association and all the coaches and workers in this field. I am happy that the championship remains in Iran.”

In the Men’s Asian Youth Beach Handball Championship, Iran won all their to take the title and book their ticket to the 2022 IHF Men’s Beach Handball Youth (U18) World Championship to be held in Greece this summer. However, it was tight for silver and bronze – the last two spots for a Greek ticket. Jordan, Pakistan and Qatar were all tied on six points and all had beaten each other, but Pakistan missed out on goal difference to finish fourth.

Argentina’s women and Brazil’s men have won their respective South and Central America Handball Confederation (SCAHC) Youth Beach Handball Championship titles after the debut edition of the events were held in Buenos Aires from 23 to 25 March.

Five women’s teams and four men’s teams were all competing at the ‘National Centre of High-Performance Athletics’ (CeNARD) for the regional title, with the top two in each competition qualifying for the 2022 IHF Men’s and Women’s Youth (U18) Beach Handball World Championships in Greece in June. As runners-up in their events, Argentina’s men and Brazil’s women have also booked their tickets to Greece.

In the Women’s competition, following the conclusion of the round-robin, Argentina, Brazil and Paraguay were tied at the top of the table with three wins from their four games. Argentina had beaten Brazil 2-0, Brazil had beaten Paraguay 2-0, and Paraguay had beaten Argentina 2-1.

However, thanks to the maths, Paraguay were the unlucky loser. Instead of a gold medal shot and World Championship qualification, they were squeezed out and had to settle for a bronze-medal match, in which they lost to Uruguay.

The final was a classic, with Brazil taking the first set against the hosts 17:16. But on home sand and the history behind them, the Argentina side came back strongly to take the second set easily,18:10, and then claim a nervy shoot-out for the title.

“The sensations are of happiness and great emotion because we worked three years to reach this moment, and now confirming ourselves is priceless,” said Argentina’s Aylin Ursino after the final.

“We made an effort, we fulfilled, and now we are celebrating this first place, we are very happy because now we are going to Greece. After losing in the first set, we knew how to reverse many things in attack, be more effective in shooting and in defence, we were able to steal many balls that were key to winning the second set.”

In the Men’s competition, Argentina led the league after the round-robin with three wins from their three group games. Brazil followed second with four points, Uruguay were in third (two points), and Paraguay finished at the bottom of the table without a win.

Argentina and Brazil overcame their semi-final opponents, Paraguay and Uruguay, respectively. Paraguay fought in the bronze-medal match against Uruguay, eventually losing in the shoot-out.

The final saw the host nation lose a tight first set (19:20) against Brazil, but they came up even shorter in the second, losing that (12:14) and settling for silver.

Despite the loss, their primary aim was to qualify for the World Championship, which was achieved.

“It is a mixture of emotions. We knew we could, and we did it, it’s beautiful,” said Argentina’s Luka La Delfa. “Everything is very nice, people give everything, we give them what we can and so we go.”

Following the completion of the first stage of the Kenyan Beach Handball League in February, the play-offs took place at the Nyali Beach Hotel in Mombasa on the last weekend of March. A total of 16 senior and four junior men’s and women’s teams participated in the event, with Coast Queens and Saints Mombasa winning the women’s and men’s championships, respectively.

The Coast Queens had brought the only 100% record into the play-offs, having won all six of their games in the first stage of the competition, and it was not different in the play-offs with the strong team defeating Mtwapa Youths 2-0 in the semi-final and Glorious Queens 2-1 in the final.

“The league has been an all sorts of experience for me that involved learning, correcting and also an ‘unlearning’ experience for me courtesy of the league officials, the coaches and my team at large,” said Coast Queens captain Viona Wandera.

“I started off as the worst player in terms of skill, but as the league has come to an end, I’m glad to see the progress and the strides I have made. I learned respect and discipline because it remains the only constant thing to do both to my teammates and league officials, especially the referees.

“I’m bubbling over with joy by how far [we have come] as a beach handball fraternity and through us, many people have come to love beach handball games. I’m sure next season we’ll have more teams participating.”

The men’s competition had seen a nervous first stage which saw 28 of the 36 games feature a shoot-out, and Pwani University eventually finished on the top. Still, they could not keep their form during the play-off stage, losing the final to Saints Mombasa 2-0. The Saints had beaten Kizingo Tigers 2-0 in their semi-final.

“The play-offs were very entertaining and we are happy to come out victorious,” said Derrick Otieno, Saints team captain.

“It was a tough final game but I would like to personally thank the match referees and officials for a job well done. Beach handball is vastly growing in the country and I would like to urge other players to keep coming. Finally, my gratitude goes to our able Technical Director, Titus Kesekwa, for making it happen.”

The winners will be awarded their medals and trophies at a forthcoming, star-studded ‘Beach Handball Sports Gala’. The Kenyan Handball Federation appeals to potential sponsors to support the event.

“With this being our first national Kenyan Beach Handball League, we are pleased with the enthusiasm and the spirit of competition which was exhibited by all the participants across the board,” said Caroline Nyadiero, KHF Executive Board member in charge of beach handball in the country.

“Special gratitude goes to our national director, Charles Omondi, for his immense contribution to beach handball in Kenya, which is always appreciated. To the CAHB through its working group member, Titus Kesekwa, whose lessons and training were invaluable to us. I would also like to thank the Kenya National Olympic Committee personally, especially their media team and James Were.

“The league was a great success, and we look forward to more fruitful engagements in the future.”

The 2022 edition of the New Zealand Beach Handball National Championship, the second one in history, took place in the sand courts of Pioneer Leisure and Recreation Centre in Christchurch, with 14 teams taking part in three different categories.

More than 60 players took part in the competition that spanned over three days, while two other sides were forced to cancel their participation due to positive COVID-19 tests in their rosters.

In the men’s competition, last year’s final between the Parrots from Wellington and Pekapeka from Canterbury was replayed, but the latter was defeated by their opponents this time around.

It was a nip-and-tuck game, with the Parrots dominating clearly in the first set (21:4), while Pekapeka took the second set (12:6) to send the game into a shoot-out. Eventually, the Parrots sealed a 9:6 win, securing the title for the first time in their history.

A shoot-out was also requested in the women’s final, played by the same teams, with the same outcome. The Parrots Shawtys sealed the title with a 2-1 win over the Pekapeka Women after taking the first set (11:8) and conceding the second one (10:11). Eventually, a 4:2 shoot-out win was enough to claim the title.

The most exciting competition was the mixed one, with seven sides taking part. However, it turned into domination from the local side, the Parrots, who entered two teams, both qualifying for the final.

The Parrots Mixed 2 team lost the first set against the Parrots Mixed team (8:10) but bounced back admirably to take the next one 14:9 and the shoot-out 9:5, clinching the overall title.

Therefore, after 41 games played on the two courts in Christchurch, the Wellington Parrots secured all three wins in the second edition of the New Zealand Beach Handball National Championship.

Find out about upcoming Beach Handball events in our Beach Sports calendar.