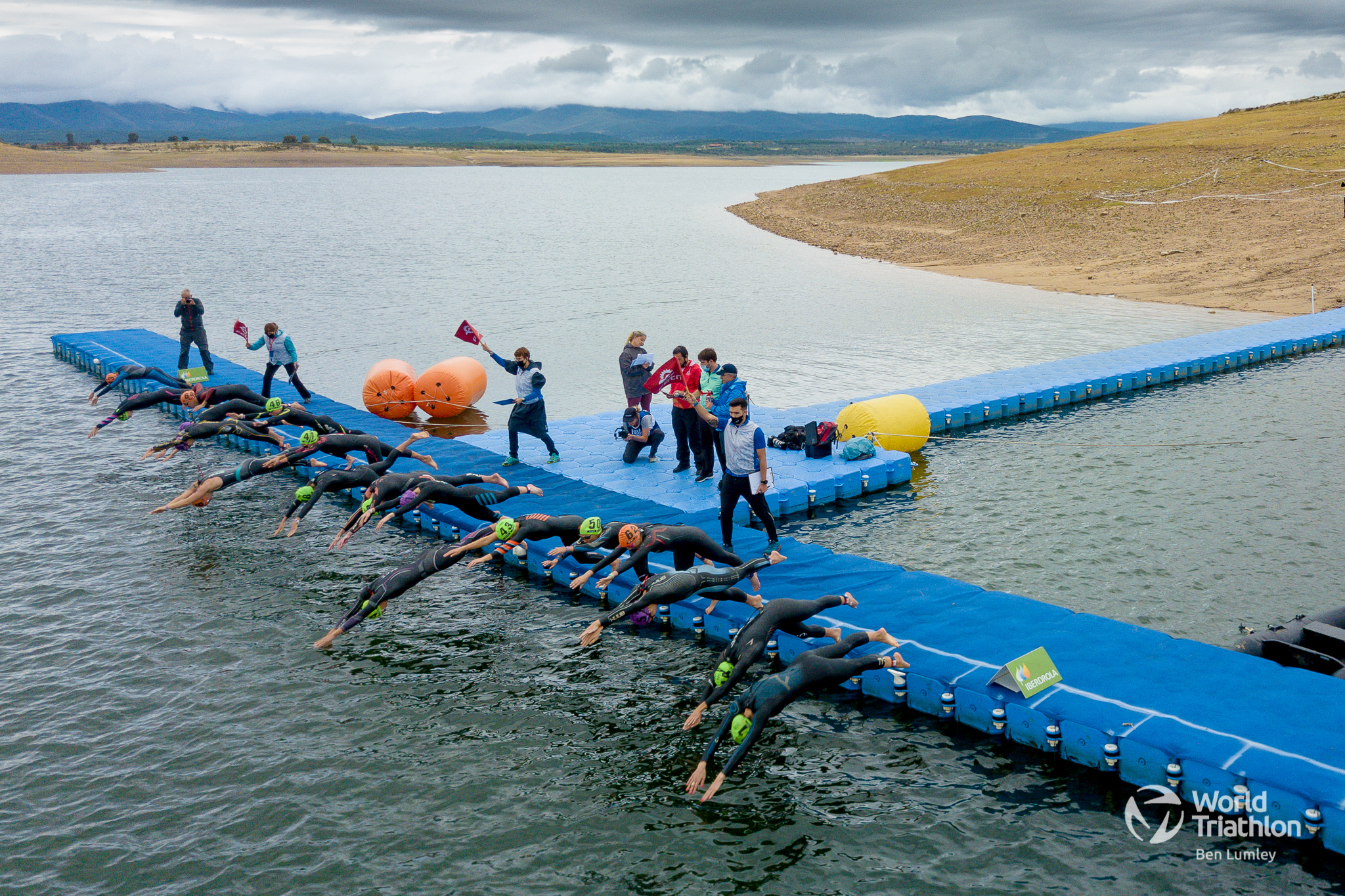 The 2021 Aquathlon World Champions took place on Saturday 30 October in El Anillo, Spain. Margot Garabedian from France and Spain’s David Castro were crowned as World Champions in the Elite categories.

Castro left it late on the 5km run to pass Richard Varga (SVK) and take the tape. The 28-year-old was third out of the water but a quick transition and slip by Varga as he removed his wetsuit saw the Spaniard out in second and well set to time his attack. Ander Noain (ESP) crossed for bronze as well as the U23 World title.

Garabedian led out of the water and never looked back, despite the close attention of Sara Perez Sala (ESP) behind. Slovakia’s Margareta Vrablova crossed in third to collect both elite bronze and the title of Junior World Champion.

It was the men out first off the pontoon and into the huge reservoir of the purpose-built outdoor sports complex for the 1km swim. Conditions had improved and the rain ceased, and it was the familiar sight of Varga’s smooth stroke out front through the first few hundred metres.

Castro was able to stay well in touch, though, exiting just 8 seconds back and taking advantage as his nearest rivals, including compatriot Andres Cendan, struggled out of their wetsuits.

As the rest of the field made it up the long path into transition, the shoes were on and the 5km run course circled half of the El Anillo complex clockwise on gravel, before heading out along the tarmac for a flat and fast second and final segment.

Varga held firm for as long as he could, but Castro moved into striking distance 400m out from the line and the Slovakian had no answer, the champion the only athlete able to break the 15-minute mark for the 5km, with a split of 14m53s.

U23 racer Noain followed across the line some 35 seconds back and ahead of Great Britain’s Jimmy Lund and Cendan. Martin Sauser (SUI) took the men’s Junior title thanks to a strong swim and 16m49 run.

“This is my first world championships and with Richard Varga here, wow, he was so fast that first 100m in the water and I just wanted to follow him,” said a thrilled Castro. “Then it was full gas on the first kilometre to catch him and then I wanted to attack on the last 400m. Richard is the best triathlon swimmer in the world, so to be out behind him was great. Overall I’m very happy how this year has gone, next year, who knows what can happen!”

“It was a good battle,” said Varga. “I knew David had improved a lot on the swim and would be hard to beat, and he caught me on the run. We ran together and I wanted to go my own pace knowing he’d be good on the sprint and I wasn’t prepared for that and had to push all the way to the finish for second. I have four wins, this is my second silver, and very happy to collect another World Aquathlon podium and looking for a fifth in the future.”

“I’m very happy to be U23 World Champion again,” said Noain. “The race was very hard but my run was fast. They (Castro and Varga) are on another level so third was a very good position to be in.”

The women went out five minutes after the men and it was Garabedian leading the charge through the swim but with Perez Sala never far behind. Sara Guerrero (ESP) exited third while Antoanela Manac (ROU) was nearly 30 seconds back as they came up the carpet to transition and then began the two-lap run.

Ukraine’s Maryna Kyryk was also well placed but lost touch in transition and was unable to make up the ground.

Manac, however, was able to reel in several of those in front of her as the metres ticked by, but the pace further ahead was relentless, Garabedian going on to post a 5km split of 17m35s, 12 seconds faster than a delighted Vrablova in third.

“This was my first time at these World Championships so it’s great to get the win,” said Garabedian. “My plan was to be in the top three out of the water, then coming out first I knew I just had to run as fast as possible on the run. I’m so happy.”

“It was a hard race,” admitted Perez. “My swim was a little slow but it was better out on the run course. I didn’t have enough power to catch the leader but I was feeling good and had the sprint in the end.”

“It is amazing, I didn’t expect this,” said Vrablova. “I was around fifth out of the water and the swim was hard but it was amazing to be with Sara and she was able to push me even more.”