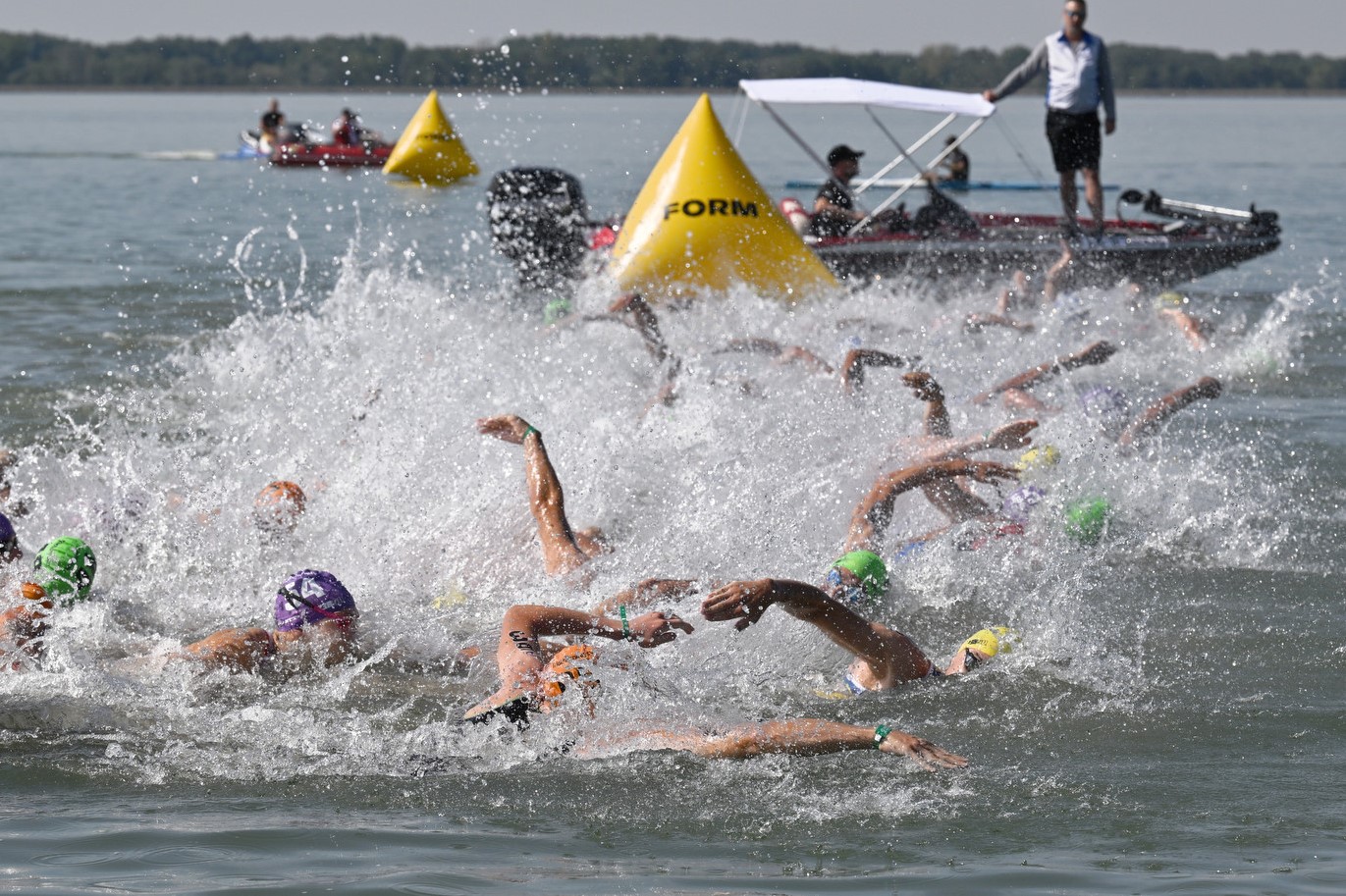 Slovakia welcomed athletes for the World Triathlon Aquathlon Championships Samorin, which opened the 2022 World Triathlon Multisport Championships schedule. Athletes were greeted with stunning conditions for the race day, with 22.6°C recorded for the air temperature and 26.3°C for the air. The race format featured a 1km swim followed by a flat and fast 5km run and was staged in the iconic X-bionic Sphere, Samorin. World titles were awarded across the elite, U23, junior and age-group categories.

Men’s Race
In the men’s race Mark Devay, representing Hungary, led the strong field of elite men through the 1km swim course, with Jamie Riddle of South Africa on his heels. A group of five men moved through together for the first portion of the Aquathlon, but it was Devay who bolstered through transition and charged onto the 5km run course, opening up a sizeable gap on the rest of the athletes around the iconic X-bionic Sphere.

Spain’s Kevin Tarek Viñuela Gonzalez showed incredible form across the swim-to-run format and attempted to run down the Hungarian. Gonzalez just didn’t quite have the leg power to match Devay on the run course.

It was a great day for Hungary in the 2022 Aquathlon World Championships as Márton Kropkó ran up to third and was able to maintain the position over the final portion of the race. Devay continued to extend his remarkable lead over the 5km run and powered to victory in Samorin, to earn the 2022 World Aquathlon title in Slovakia.

“It feels really good, this is my first ever Aquathlon world championship, I did the European event and the Beach Games a couple of years ago so I feel pretty good. Still quite tired from Munich, Olympic distance and a mixed relay, so the legs are pretty much destroyed so today I just tried to hold and put in 100% from last week. I just wanted to push the swim as much as I could. I kept looking back to see if I could drop the others. I had some issues with the second to last buoy because of the sun, so I had to sight a bit more often than I wanted to and managed to get a good gap. Just quick;y get into transition, which took forever, it was very long and get the shoes on and get the run done as fast as I can. It was a nice course. It’s pretty amazing out here, we have a whole sports venue with track, swimming pool and the horse track which is pretty cool.” said Devay.

Gonzalez was consistent across the entire race format and was awarded the silver medal for Spain and Kropkó of Hungary claimed the bronze, completing the men’s podium in Samorin.

Women’s Race
The women’s race was filled with experience and new talent. Germany’s Celine Kaiser came out of the swim nearly one minute down on the rest of the field and astonished the field with a blistering run leg. The German athlete, who had never competed in an Aquathlon before, took over Hungary’s Marta Kropko, who led the field out of the swim, to showcase a powerful run to victory and was crowned 2022 Aquathlon World Champion in Samorin.

“I am feeling amazing, and I didn’t expect the result, and it was great to race here. My tactic was to be not too far away from the first swimmer. It was very good for me that the transition was very long, it was great to run here. I really loved the race format and I also like the venue and it’s very well organised. I would be very happy to race here again, the atmosphere is very familiar even though there are some very good athletes here, it feels like a family here. I didn’t plan to race here so I am just looking from week to week to which competition I want to do. Maybe I want to compete at the European Championships,” said Kaiser.

Find out about all other Aquathlon events on our Beach Sports calendar.