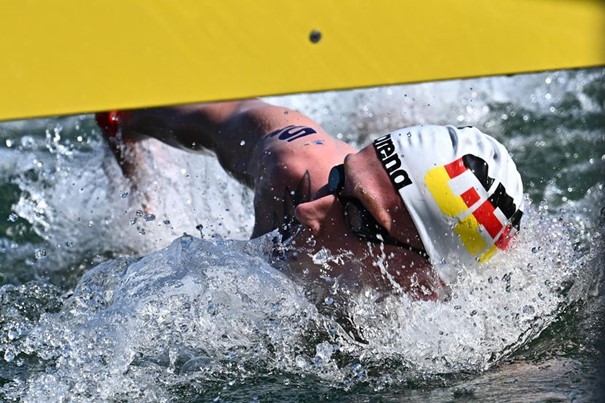 The 5km Open Water Swim race at the FINA World Championship Budapest 2022 was the selected event to qualify NOCs for next year’s ANOC World Beach Games in Bali. The official water temperature was 26.7 and a mild breeze allowed the national flags to briefly unfurl at the start of the race; the air temperature was 24 degrees Celsius at the start of the race and rose to nearly 30 at the time of the finish.

The German Florian Wellbrock, the Tokyo 2020 Gold medallist in Olympic Marathon 10 km, was the quickest of the 63 men in the Men’s 5km open water race, covering the 5km distance in 52.48.8.

The determination of Italian challenger Gregorio Paltinieri was admirable as he matched the Bremen native through the race until the final push for the home on the third-of-three 1.67km race laps.

Paltrinieri, a multi-time Olympic and FINA World Champion, put himself in position for another title as the German and Italian put open water between themselves and the rest of the field before finishing 3.9 seconds after Wellbrock’s arrival.

Ukraine’s Mykhailo Romanchuk completed the medals podium. After pushing a hard opening pace that left the field swimming in a mostly strung-out, Romanchuk finished the race 25 seconds behind his new German training partner. Wellbrock had invited Romanchuk to join his training group in March.

The Brazilian swimmer Ana Marcela Cunha defended her 5km Open Water Swim title in Budapest. Coming 9th after the 400m mark and 3rd after the 3.2km mark, Cunha’s strategy was to move into the lead before the final orange buoy and hold onto the advantage through to the finish. She stopped the clock at 57:52.9, ahead of the rest of the 50-racer field.

Aurelie Muller of France finished in second place, less than one second behind Cunha. Both Cunha and Muller competed in the inaugural Olympic Marathon 10km at the Beijing 2008 Olympic Games. In that race, Cunha finished fifth and Muller twenty-first.

The Open Water 5km Qualification System is available through the following link. Please note that all information on Qualification Places is provisional and must still be confirmed by the International Federation.

Find out about upcoming Open Water Swimming events in our Beach Sports calendar.