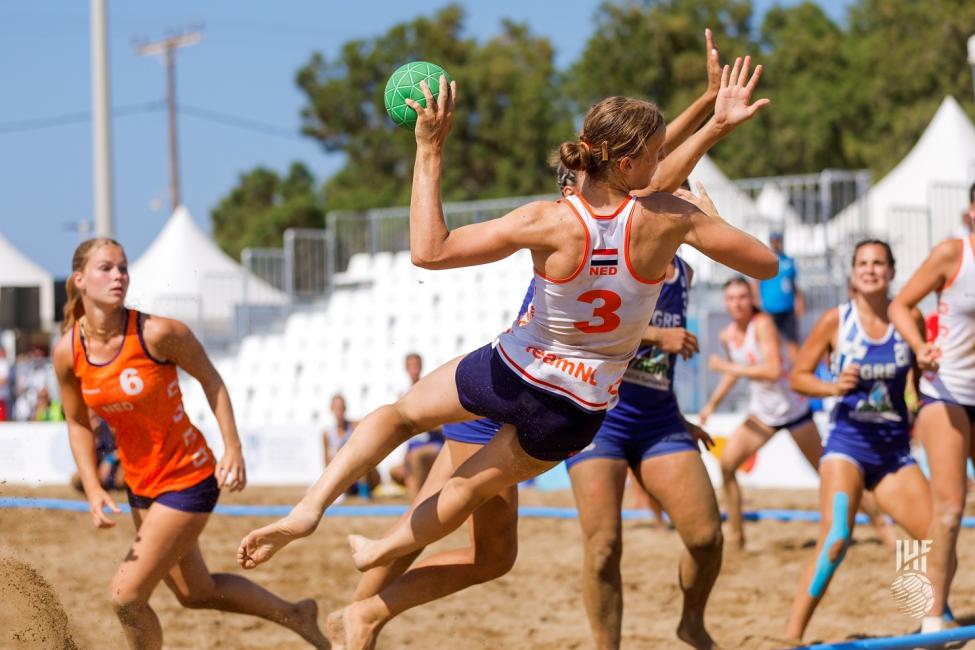 Much more than the World Championship was at stake in Crete as the best five ranked teams per gender would qualify their National Olympic Committee for the ANOC World Beach Games in Bali next year.

In the Women’s event, Germany became World Championship, beating Spain in the final (15-14, 22-20), without dropping a single period during the whole tournament.

On winning both restarts from the referee throw in the golden goal periods she said: “I’m a tall person, but it’s difficult to find the right timing and the others have another strategy, but it’s a little bit of luck as well. But we have a good defence who helped me and was team work.”

Later she added to the question if these moments make the sacrifice of training worth it: “It’s the team. It’s our emotion. We stay together and we know each other…and this handball knowledge they have.”

Virginia Fernandez Robles from Spain commented after the match, “We are proud of the second place we won, although of course we were sad to lose in the final. We have improved as a team, we played very well throughout the world championship and we represented our country in the best way. We took the second place in the world, while a week ago our youth took first place here in Crete. Our sport in Spain is at a very high level.”

In the Bronze medal match, the Netherlands defeated host nation Greece in a very close match that got decided in the Penalty Shootout (23-22, 16-19, 9-8). We look forward to seeing the teams of Germany, Spain, Netherlands, Greece and Denmark compete at the ANOC World Beach Games Bali 2023.

Croatia became World Champion for a third time, winning both periods (24-22, 21-18) against Denmark.

The Croatia player Dominik Markovic said after the final, “It’s an amazing feeling. It’s my first championship gold medal in five years with the Croatia national team and it’s very special. We’re number one in the world. I congratulate my team, Croatia. Congrats to Denmark. They are a very good team and good luck for the next championship.”

In the Bronze medal match Brazil defeated the host nation Greece with 18-15 and 24-18. The Greek coach Ioannis Lazaridis lamented after the match, “a fourth place in the world is a very big thing, but it leaves us with a bitterness because we did not manage to get a medal. We were very close and the fact that we were left with bitterness that we lost to Croatia and Brazil says it all about this team.”

He continued, “the player’s eyes were sparkling in the fight, we saw it every moment. From the warm-up until the last second, they had the will, the heart. The fact that we could not win in the small final against world champions Brazil, who have counted only two defeats in the last seven years, was a matter of one, two possessions.”

However, Greece will have a chance next year in Bali to fight for the medals as the team qualified along with Croatia, Denmark, Brazil and Qatar for the ANOC World Beach Games.

Find out about upcoming Beach Handball events in our Beach Sports calendar.