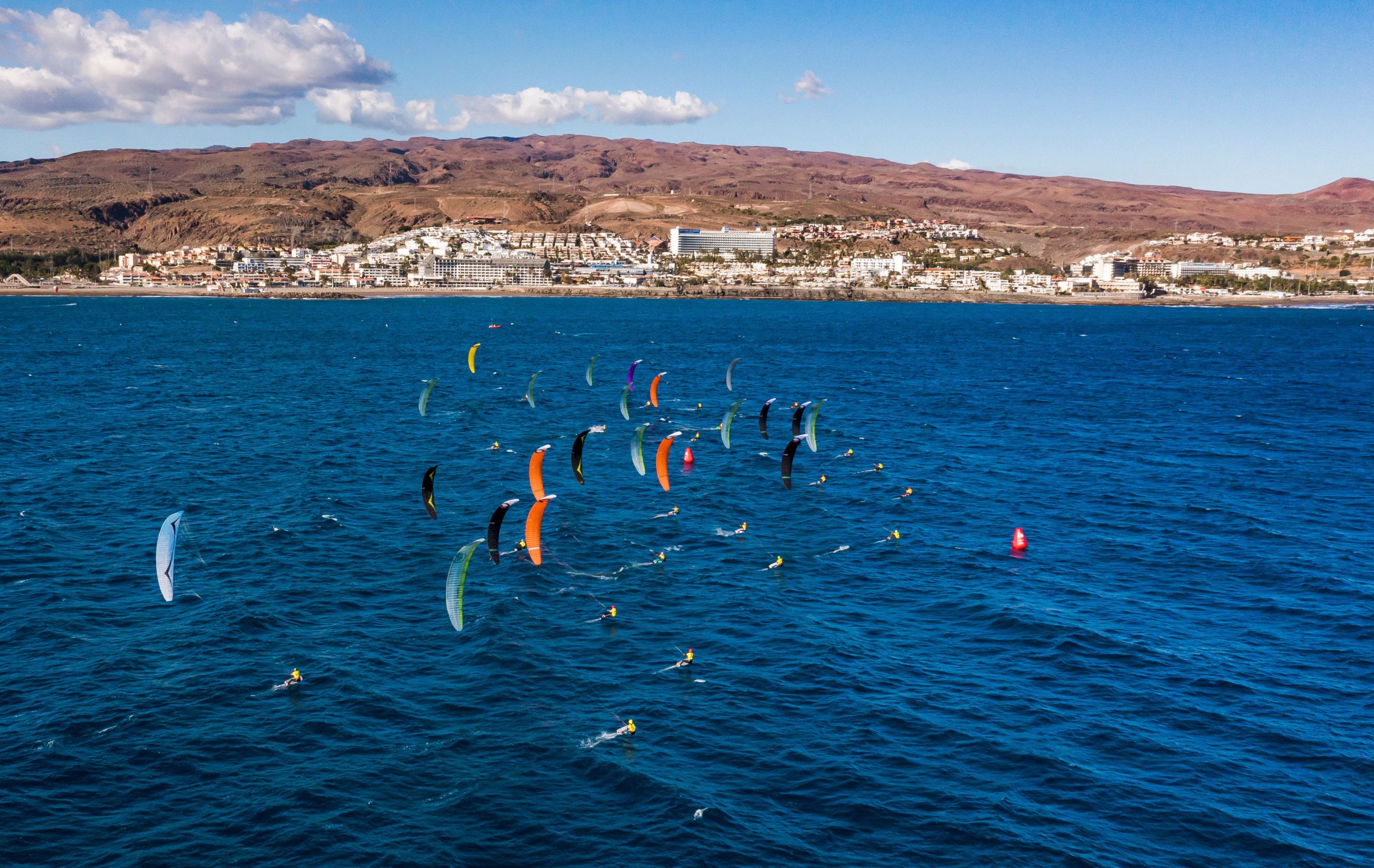 Axel Mazella and Poema Newland have become champions of Gran Canaria, the fifth and final event of the 2021 KiteFoil World Series. Both French riders have also been crowned champions of the 2021 season. For Mazella, this is his third World Series title to go with his victories in 2017 and 2019. For Newland, her maiden victory in the Series is the perfect conclusion to a dramatic year of improvement.

Up until the start of the year, Newland admits she hadn’t been fully committed to an Olympic campaign for Paris 2024. But some time away from competition gave her the opportunity to think hard about her future. “Since January of 2021, I became really motivated and I’m really putting everything of my life into this goal. That’s why maybe I did a big jump with my performance this year. Now I organise all of my life around kite foiling.”

At the prizegiving, the scale of Newland’s achievement hadn’t yet sunk in. “I don’t think I realise yet. Maybe after three or four drinks tonight I will start to understand!”

Mazella was in dominant form again today, winning five of the six races in big swell, high-wind conditions that gusted over 25 knots. The question of the Frenchman winning this event never really looked in doubt. The battle for second place, on the other hand, remained in the balance until the very final downwind leg of the final race of the year. Denis Taradin took up the race lead in a bid to close down the two point deficit to his rival Connor Bainbridge who was back in third place behind Croatia’s Martin Dolenc. As things stood they would finish on equal points with the Russian Federation rider higher number of race wins giving him second overall after tiebreak.

However Dolenc slipped back, only to be replaced by Mazella who profited from an early gybe on the final run to slingshot his way past the Croatian and the Briton and into second place, close on the heels of Taradin. One more gybe to the final turning gate and Taradin stepped forward a fraction too far on his board and crashed spectacularly, his carbon bar disintegrating in the impact and the kite breaking loose and up into the air. Taradin’s charge for second place was over in an instant as Mazella, Bainbridge and the rest of the fleet swept past the Russian rider.

“It was a big crash, pretty dramatic,” said Taradin afterwards, “but I’m happy with third from the event and third from the season.” For Bainbridge, second place was a good way to finish his year, even if he expects more in the future. “Axel remains the benchmark for all of us in those conditions but the good thing for me was that on day one we were racing it out at the front together and there wasn’t much in it. Axel pulls ahead on all the little details that add up over the course of a race, and that’s an area that I need to improve. But I know where I need to get for next year.”

Mazella was delighted with his third season title victory. “Really good racing today, a lot to think about. In the last race I got a piece of rope that was floating in the water caught around my foil and I couldn’t get it off. I tried jumping the foil a few times but in the end I had to reverse a bit and then got free of it before I could get going again. Nothing is ever easy in kitefoiling! But I’m very happy to win here and to win this championship again.”

IKA Class Manager Markus Schwendtner paid tribute to the riders. “It has been a difficult season but a great success in many ways too, and that’s down to many people who work to help bring this exciting sport alive, and most of all down to the talent, passion and enthusiasm of the riders who dedicate themselves to becoming the best kitefoiling athletes in the world.”

All other results are available here.

The magical Mamaia Beach in Constanta welcomed the beach wrestlers with clear blue skies and scorching sun set for the [..]