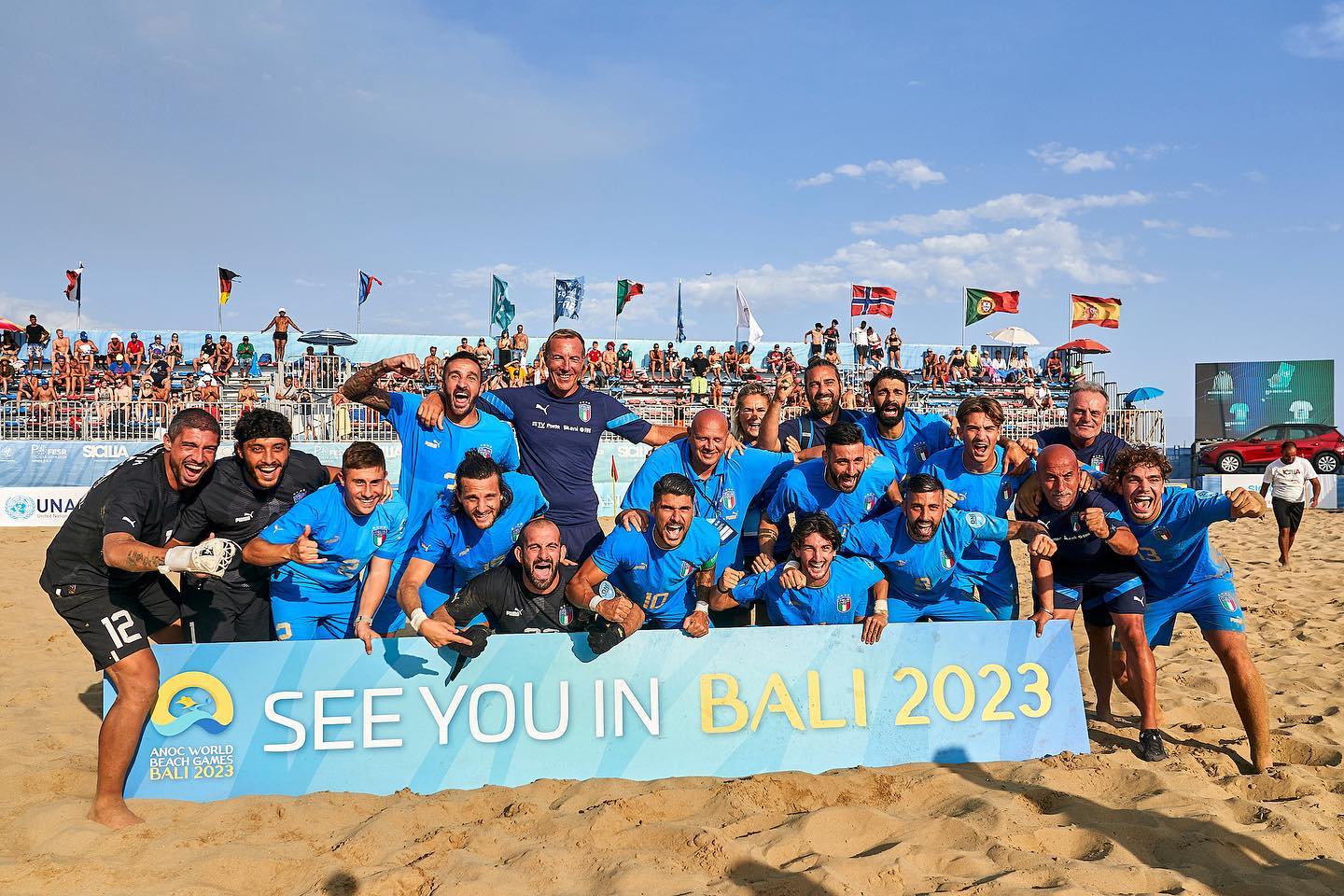 The Sicilian city of Catania welcomed the best European Men’s and Women’s Beach Soccer teams from 31 August to 4 September to play for the five Men qualification spots and four Women qualification places.

Spain was the winner of the ANOC World Beach Games European Qualifier after beating Portugal in the final. However, we will see both teams playing in Bali next year. The teams of Ukraine and Switzerland matched themselves for third place, knowing they already had their Bali tickets in their pockets. Only one qualification place was left to grab, and it was decided between Italy and France.

In front of their own crowd, the Italians had the better start, with Zurlo scoring from the penalty line five minutes into the game, sending the Squadra Azzurra into the second period ahead.

Carpita denied the French an equalising goal with three consecutive saves, and immediately after that, Gori showed up on the far post to turn in a pass from Remedi. Motivated by the goal, the Italians hit a third one minute later, with Carpita serving Zurlo directly in the attack, and the forward scored with a bicycle kick. Less than five minutes into the second break, Belhomme netted in similar fashion – a well-struck bicycle kick that saw France take a step closer to the Italians.

Sciacca was the protagonist of a skilful individual piece of play that was only stopped by Salazar, but the French goalkeeper was unable to save Zurlo’s bicycle kick with six minutes to go. The number nine’s hat-trick sealed the result by four goals to one win, qualifying Italy for the ANOC World Beach Games Bali 2023.

For the second time in two months, Spain has beaten Iberian rivals Portugal to a trophy, with Chiky Ardil running riot against Europe’s top-ranked nation once again, claiming not only the Top Scorer award with 11 goals but the MVP too. With both teams already qualified to Bali, Portugal and Spain closed the European Qualifier in what could be considered a competitive test ahead of the Euro Beach Soccer League Superfinal in Cagliari next week.

The first period was a tight affair with both goalkeepers showing all their quality to keep the nil-nil on the scoreboard until the first period’s last minute when Dona served Chiky Ardil, who put a bicycle kick past Andrade to break the deadlock.

Chiky’s afternoon of inspiration was just getting started as in the second period, he scored his second and third goal in only twenty seconds, giving Spain a comfortable margin of three goals that was shortened by Bê Martins’s goal one minute later. But Chiky still hadn’t had enough and blasted Spain’s fourth goal to restore the three-goal lead going into the final twelve minutes.

Kuman also added his name to the scoresheet, taking his chance when he was one-on-one with the goalkeeper two minutes into the third period, just before Bê Martins scored his second from the penalty line. La Roja’s sixth goal was scored by the inevitable Chiky Ardil, who thus became the competition’s top scorer.

England lifted the qualifier trophy in Catania after winning against Ukraine in the final. Spain and Italy will join Great Britain and Ukraine in Bali next year.

The final started as a tight affair, with the keepers being called into action on several occasions to keep the score at 0-0 going into the second period. England was defending an unbeaten record in Catania and looked the better of the two sides, slowly increasing the pressure until the breakthrough came from a Gemma Hillier free kick, acrobatically celebrated.

Molly Clark doubled the lead, nodding in at the far post and in the third period, Kempson fired a low left-footed shot into the bottom corner to make it 3-0. Then it was just a case of seeing the game out until the final whistle, as Hannah Haughton managed to keep a clean sheet, and the Lionesses claim the title of the ANOC World Beach Games European Qualifier champion, just as they did in 2019 at the same Qualifier in Salou, Spain.

After the disappointment of being eliminated in the semi-finals, Spain and Italy wanted to finish the tournament on a positive note by winning the match that would decide third place.

With two goals from goalkeeper Natalia and Terrassa’s Cris in less than 30 seconds, Spain went into the second period leading. Privitera pulled one back for Italy, but the Spanish would increase the lead through captain Mirón and Andrea.

The Italians didn’t give up and reacted with goals from Olivieri and Privitera (her second with a header answering a corner by Iannella), but it wasn’t enough to take the third place away from La Roja.

Results of the Knock-out stage: