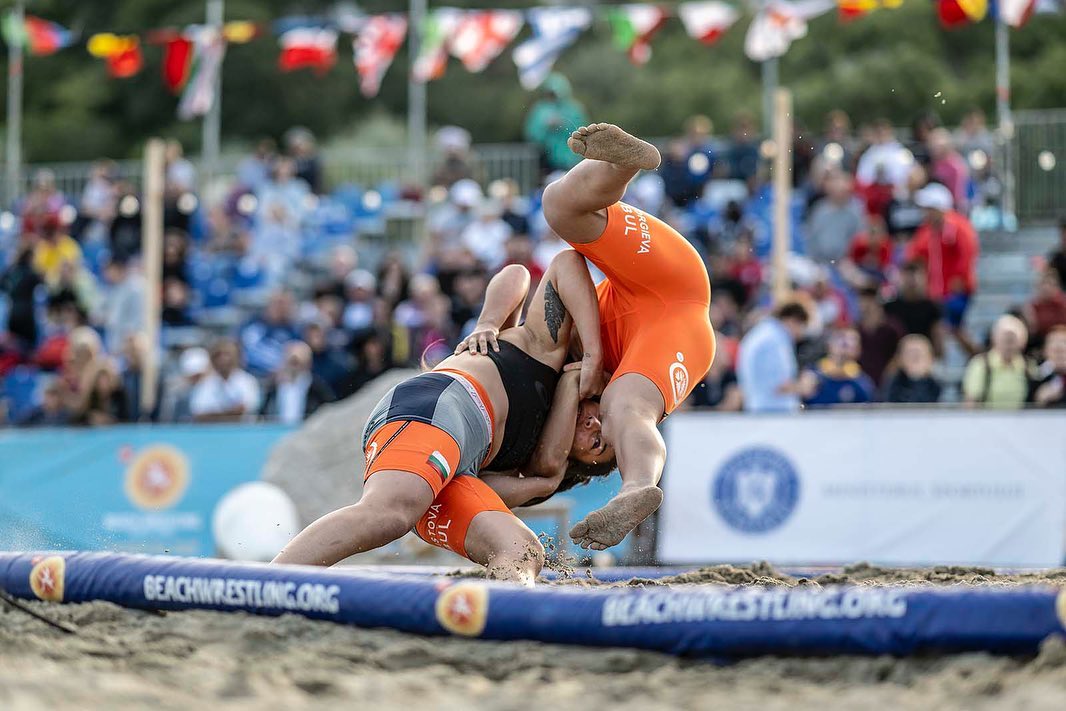 After four fantastic legs of Beach Wrestling World Series action the champions are set to be crowned in the final leg, which took place on Mamaia Beach in Constanta. The oldest inhabited city in Romania was a perfect choice of venue for this new style of one of the oldest sports given that it also mixes traditional with trendy.

The 2022 Beach Wrestling World Series has excited fans across five legs, starting on Ortaca Beach in Turkey at the end of May before making its way to sensational Silgar Beach in Sanxenxo, Spain for the second leg. Stop three saw wrestling’s fastest evolving style move to the Côte d’Azur where the sand superstars wowed the crowds on Cousteau Beach, France. The penultimate event was hosted in Katerini, Greece as the party returned to Paralia Beach.

The rain delayed the start of the final leg of the Beach Wrestling World Series in Constanta, but it didn’t dampen the mood of the fans or wrestlers alike. It didn’t take long for the sand to start flying as 370 Sand Superstars from 20 nations staked their claims for the last gold of the year and another chance for ANOC World Beach Games ranking points. You can access the Beach Wrestling Qualification System for the ANOC World Beach Games Bali 2023 through the following link.

It was a massive shock in the women’s 50kg where Stefania PRICEPUTU (ROU) had looked like she was headed for gold as she reached another final but Indian newcomer Kumari HANNY had other ideas and took the gold on Romanian soil much to the disappointment of the home sand crowd and the Princess of Power herself.

The 23-year-old had the massive consolation of the silver medal for step five and Beach Wrestling World Championships title for the second year in a row. Turkey’s Emine CATALOGLU took bronze in the leg with a win over Alina Adriana CORBEANU (ROU) and World Championships silver with Hanny taking bronze.

In the women’s 60kg, World Championship victory and the gold for the final stop went to Ukrainian Iryna KHARIV who had been impressive all season and this leg was no different, defeating Elena Simona IONESCU (ROU) in the final to secure the title.

Her compatriot Daria MEDVETSKA took home the bronze as she dusted herself down from Semi Final defeat to Khariv with a win over Kusum KUSUM (IND). Medvestka can be content with a fine debut season that has seen her claim World Championships silver with beaten finalist Elena Ionescu taking the overall bronze.

Both Sofiya Hristova GEORGIEVA and Mimi Nikolova HRISTOVA (BUL) had to do it the hard way to the final of the women’s 70kg, both being drawn to wrestle in the preliminary round, before making the rounds proper. Neither let it affect them as opponent after opponent was dispatched. Hristova proved to be a step too much for Georgieva though as she smashed her way to a 4-0 win after only 9 seconds to take the leg gold. Manon KURY (FRA) took bronze with a 3-2 victory over Viktoria FELHO (HUN) with just 6 seconds remaining.

Catalina AXENTE (ROU) took home the final leg and the gold in the World Championships last year in Constanta and is now a back-to-back World Beach Wrestling Champion having beaten Ukrainian Liudmyla PAVLOVETS TYCHYNA 2-0 in a close final to the delight of the watching crowd on Mamaia Beach. Pavlovets Tychyna’s efforts saw her land the silver medal in the world title fight.

lorious Georgian Levan KELEKHSASHVILI landed a three-peat and secured the Beach Wrestling World Championships title for the third time in a row. He defeated Ramiz HASANOV of Azerbaijan 5-2 in a final that was tied at 2-2 before Kelekhsashvili pinned the Azerbaijani with 24 seconds left and Hasanov had to settle for the silver medal. Turkey’s Yunus COSKUN took home the leg and overall bronze as he squeezed out Stefan Ionut COMAN (ROU) 1-0 in the 3/4th placed match.

Another Georgian with gold on his mind was U21 Freestyle World and European Championship bronze medallist Nika KENTCHADZE in the 80kg category; and his single mindedness paid off the 25-year-old scooped both the stop and World Championships golds without dropping a single point. An injury stopped Hungarian Csaba VIDA from taking his place in the sandy circle for the final match to become runner-up in Romania. Indian Vijay VIJAY took home the bronze with a victory over Maxim VASILIOGLO (ROU).

Despite losing out to Vida in the quarter finals here in Constanta, Azerbaijani Omid Abdolali KAMALIAGHDAM took home silver in the World Championships with Hungary’s Vida just missing out by 1500 points to become a bronze medal winner.

It was an all-Azerbaijani final in the men’s 90kg division as Ibrahim YUSUBOV and Farid JABBAROV both wrestled their way into contention for the gold. However, Jabbarov had to withdraw in the final match to become Vice-World Champion, leaving Yusubov with the wins for the day as well as the in the world title fights.

Turkey’s Mahmut Seyfi OZKAYA took the bronze as he defeated Davit KHUTSISHVILI, who had dislocated his shoulder the day before, in their last match; it wasn’t enough though to overtake Khutsishvili in the overall rankings as the Georgian claimed the second place and Ozkaya had to be content with overall bronze.

Turkey’s Fatih Yasarli had won the opening leg of the Beach Wrestling World Series heavyweight divings on home sand in Ortaca and it has been a titanic tussle between Mamuka KORDZAIA (GEO) and himself throughout the year; so it was apt that these two would be contesting the final. It was Yasarli who would come out on top with a 3-0 win, pushing Kordzaia out of the sandy circle after 1:30 minutes for his 3rd point of the bout and the gold medal.

Georgi Lyubomirov IVANOV, who had ended Oyan NAZARIANI’s (AZE) comeback in the quarter finals, took bronze when he defeated Vasile Vlad CARAS (ROU) in the battle for place 3/4 of the medals. Yasarli’s victory was enough to take the world title with a 2500-point lead over Kordzaia, with the Georgian finishing second overall and Caras taking bronze.

All the results are available here. Re-watch all matches on Beach Wrestling World Series’s Youtube Channel.