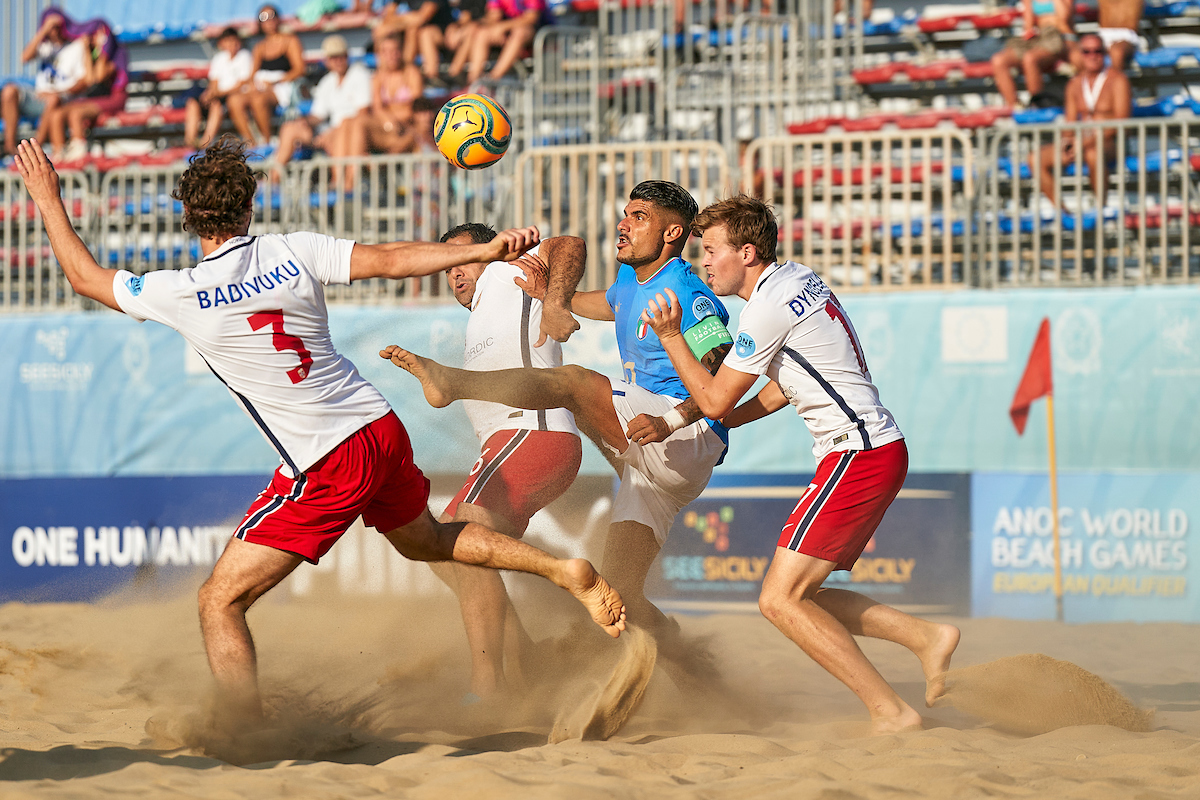 The Men’s tournament is played from 29 August to 4 September at See Sicily Arena Beach Stadium and will decide which five men’s national teams will represent Europe at the 2023 ANOC World Beach Games in Bali. The Women’s event is played from 31 August to 4 September and awards four qualification spots for next year’s multi-sport Games in Indonesia.

Matchday 3 saw Italy beat France, Portugal put 12 past Germany, Switzerland fought difficult tie against Ukraine but walked away with the points, while Spain defeated Turkey in another thrilling bout.

With the home crowd cheering for the Squadra Azzurra, Italy and France faced each other with the first place in the group yet to be decided. Halfway into a tight first period, Luca Bertacca fired a powerful long-range free-kick into the top corner of Salazar’s net, and the French keeper had no chance of preventing Italy’s first goal. France equalised with a penalty scored by Belhomme, punishing a foul by Josep Jr. three minutes into the second period.

The two top teams in Group C went head-to-head to decide who would finish in first, and the Swiss took the lead just before the first break with a screamer from their star number 10, Noel Ott, who curled the opener into the top corner. With outfield players filling in between the sticks for both sides, Ukraine finally got off the mark with long-range goals from Korniichuk (2) and Zavorotnyi, but Ott and Spacca powered in brilliant strikes to take the final score to 7-3. Both sides will play in Friday’s quarter-finals, where the tickets to the World Beach Games in Bali will be fought for.

Results of the Group stage:

The hosts’ debut in the competition was against the Czech Republic, with both teams looking for a positive start and a significant win in the race to Bali. Angela Ruotolo made a couple of good saves to keep the Czechs at bay, but an own-goal from Ianella would set the difference between both teams in the first period. The Italians came back from the break with a renewed spirit and equalised through Vecchione. The Italians would go into the final period with a two-goal lead, courtesy of a long-range shot from Vecchione, her second goal of the game. Italy did not take their foot off the pedal, creating many occasions up front, and Veronica Privitera sealed a hat-trick with a pass from Claudia Saggion to put the final score at 6-2.

In their first-ever official beach soccer match, Sweden impressed against the defending ANOC World Beach Games gold medallists, netting their first two goals on the sand – one of which was a screamer from Kajsa – but Spain took the opening points in Catania. Cris, Euro Winners Cup champion with Terrassa Bonaire, put away the first goal of the match from a corner. However, moments later, Sweden’s first official goal was scored by Matilda, also from a corner, to equalise for the debutants. At the end La Roja scored four goals, and with a two-goal lead, they wrapped up the points for the world’s top-ranked team.