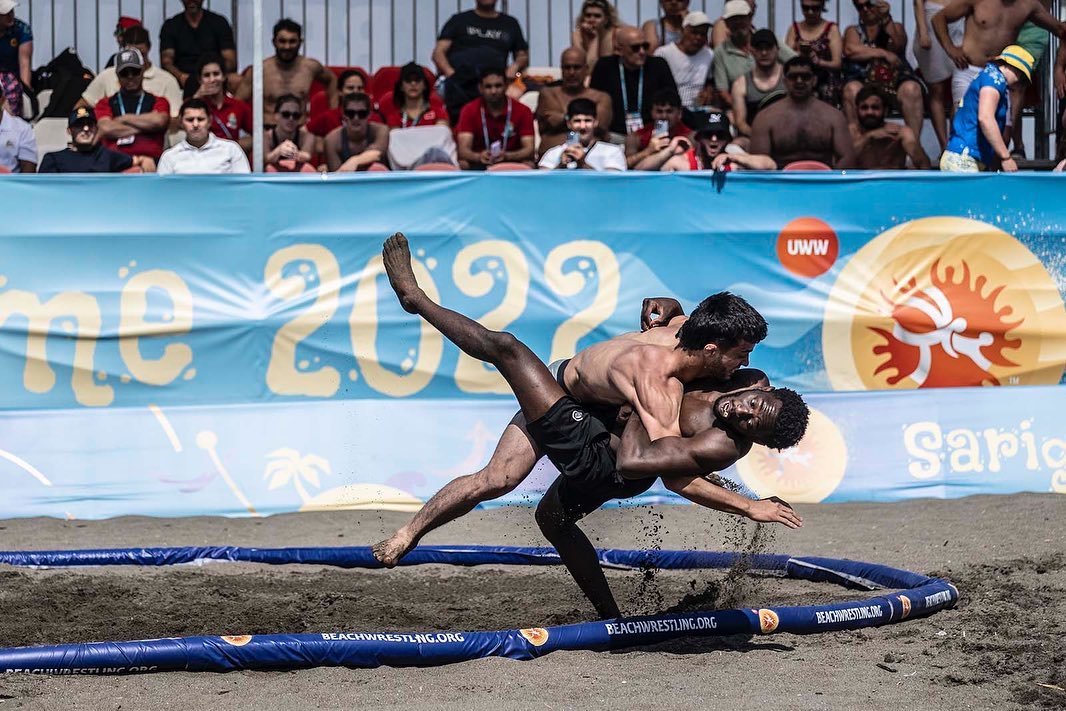 The first leg of the 2022 Beach Wrestling World Series got underway on stunning Sarigereme Beach in Ortaca, Turkey

Sarigereme Beach hosted the first stage of the 2022 Beach Wrestling World Series on 28 and 29 May. 72 wrestlers (40 men and 32 women) from 13 nations, including five countries that had never entered before, took to the sand in soaring temperatures. With sensational sunshine, a vibrant crowd watched as the sands started to fly and danced to the music, creating that unique beach wrestling atmosphere; and they were treated to some top-quality beach wrestling action as the World Series got started. Romania continues to be the commanding force in the women’s Beach Wrestling World Series. In their Beach Wrestling debut, an impressive Indian team equalled the Turkish hosts’ in the medal table.

In the men’s division, Levan KELEKHSASHVILI (GEO) had already won back to back the World Series titles in the Under 70kg category, and at the start of the 2022 edition, it looked like business as usual as the 30-year-old athlete made his way into the final without much fuss. However, the glorious Georgian ended up with silver at this stop as he was defeated in the final by Raviraj Dharmraj CHAVAN, who became India’s first-ever Beach Wrestling World Series gold medallist in their first-ever event. Azerbaijan’s Ramiz HASABOV took bronze with his victory over Fatih ONALAN (TUR).

The Georgians have a great record in the Series and Nika KENCHADZE became the latest to take home a gold medal in the 80kg division, as he beat Csaba VIDA (HUN) in the final and having beaten Omid Abdolali KAMALIAGHDAM (AZE) in the semi-final. KAMALIAGHDAM would take home the bronze after a victory over Tajikistan debutant Somonjon IKROMOV in the 3/4th place match.

The outcome of the Men’s 90kg was anyone’s guess, and there was a shock as the group stages ended when last year’s 80kg champion David KHUTSISHVILI, who had stepped up a weight class, was beaten in his final group match by Patrik PUESPOEKI (HUN) and exited the competition before the finals. The final saw PUESPOEKI take on World Series 2021 silver medallist Ibrahim YUSUBOV (AZE), with the Azeri celebrating gold at the end, having scored the last point in a 1-1 tie. Muhammad INAM (PAK) got himself back on the podium to pick up bronze with a win over Mahmut Seyfi OZKAYA (TUR).

The heavyweight division (+90kg) has been a straight shootout between Mamuka KORDZAIA (GEO) and ‘The Big Gun’ Oyan NAZARIANI (AZE) over the past two editions. Very few would have bet against both men to compete in the gold medal match. But neither of them would be taking part in the final after losing their semi-finals; this was much to the delight of the home sand crowd as two Turkish heavyweights, namely Fatih YASARLI and Hidayet KURT, faced off for gold, with YASARLI getting the win. KORDZAIA took home the bronze after a muscle injury suffered at the end of yesterday’s second group stage match proved too painful for NAZARIANI to continue to fight on with.

The women’s 50kg division saw last year’s series gold and silver medalists Stefanie PRICEPUTU (ROU) and Emine CATALOGU (TUR) make their way to the final match, and it was the princess of power PRICEPUTU who came out on top to claim the gold with the home sand star Catalogu picking up silver. In the bronze medal match, the Indian wrestler Nisha TOMAR, making her debut in the Series, defeated fellow newcomer Bianka RECZI (HUN).

Iryna CHYKHRADZE (UKR) had impressed on the first competition day in the 60kg division, and she didn’t disappoint on day two as she breezed through to the final without dropping a point where she faced Preeti PREETI (IND), who was making her series debut. It was CHYKHRADZE who would claim gold for Ukraine, with PREETI taking home silver. Nikolett SZABO from Hungary claimed the bronze with a victory over Elena IONESCU (ROU).

Another female who had caught the eye on the first day was the Romanian Adina IRIMIA in the 70kg class, and her fine form continued on the finals day as she eased into the final to face Viktoria FELHO (HUN) and took home the gold with a dominant display in a 3-0 win. The home sand nation had to settle for bronze in an all Turkish bronze medal bout where Hatice TEKIN beat compatriot Ozlem SIMSEK to clinch third place.

The defending woman’s +70kg title holder Catalina AXENTE (ROU) showed why she is the champion as she lifted the gold without losing a single point in her four bouts as she ended the golden dreams of Pooja POOJA (IND), who took the third Indian medal in the woman’s division. Greece’s Stefania ZACHEILA grabbed Greece’s first medal of this Series, winning a bronze medal by defeating Aysegul OZBEGE.

The top technique awards were awarded to newcomer Bianka RECZI from Hungary for her round 3 takedowns of Aysun SEVINGEN (TUR) in the women’s 50kg category. The men’s fan vote went to Greece’s Christos Christoforidis (80kg) for throwing Mukhammed ALIIEV (UKR) on his back. The Series now heads for Silgar beach in Sanxenxo, Spain, for the second stop on the 18th and 19th June. Find out about all other Beach Wrestling events on our Beach Sports calendar