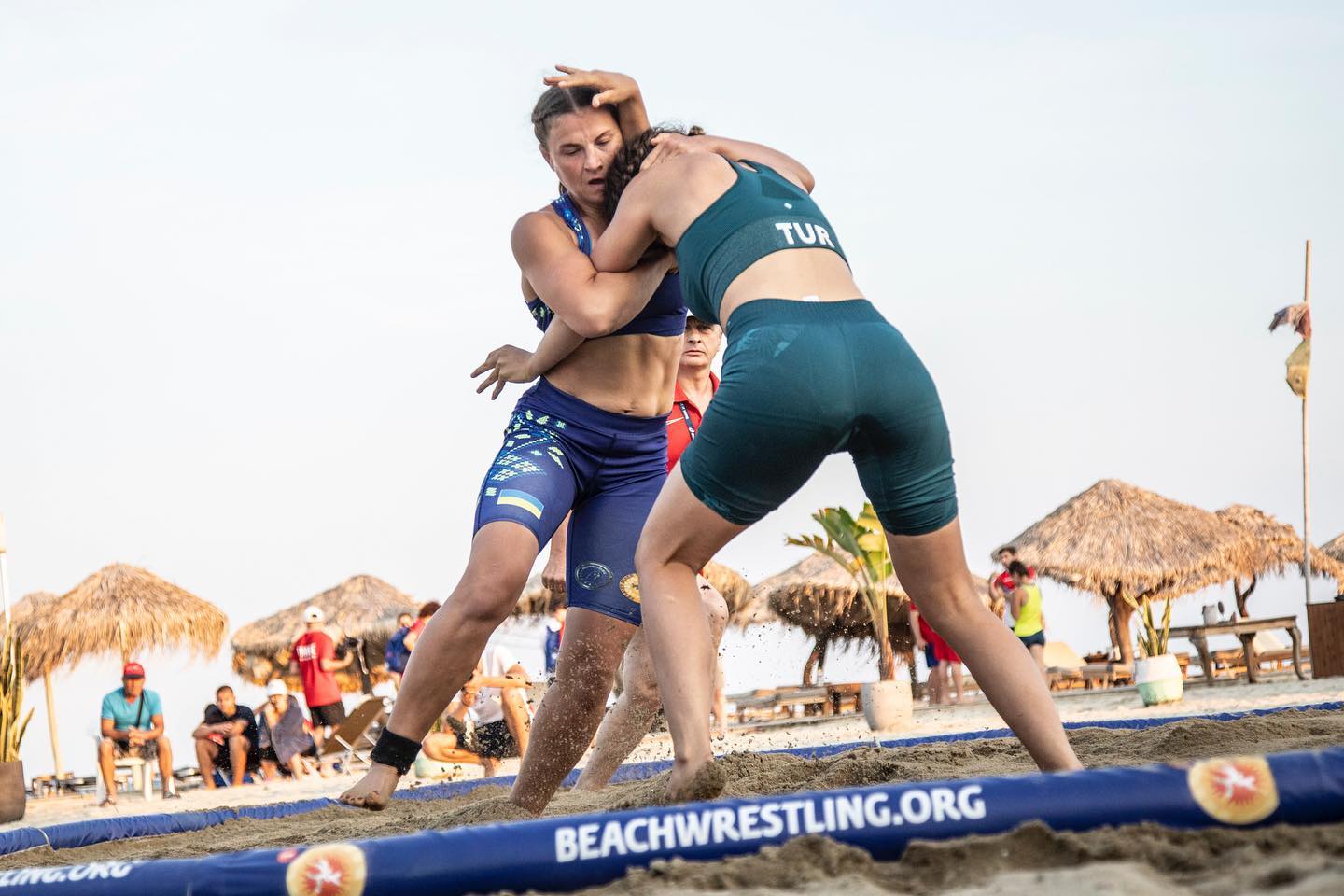 The morning sun was shining brightly on the beautiful sands of the Paralia beach in Katerini as the 3rd leg of the Beach Wrestling World Series got underway last weekend. The Greek leg of the Beach Wrestling World Series kicked off with a highly charged home crowd giving great backing to their compatriots as they took to the sand in their numbers with no fewer tha 15 Greek wrestlers taking their part in a field of 58 wrestlers from 12 nations from around the world.

There was a vibrant and noisy crowd surrounding the sandy circles right from the first whistle and with the sun beating down our sand-based stars got the action underway with Stefania Claudia PRICEPUTU (ROM, -50kg) winning her third straight group match of this leg with a win over Liliana COSTA DOS SANTOS (POR).

Emine CATALOGLU (TUR) kept the pressure on the Romanian with a win over Ana Nair MARQUES DIAS (POR) but PRICEPUTU won her final match to record four wins out of four and take home her third straight World Beach Wrestling Series Gold medal to leave her one more series victory away from a clean sweep; something that she can achieve on home sand as leg four of this year’s Series comes to Romania’s Constanta at Mamaia Beach. CATALOGLU took home the silver with victory over Ukraine’s Tetiana PROFATILOVA with Portugal’s Liliana COSTA DOS SANTOS taking home the Bronze.

In the women’s -60kg division Anastasiya KRAVCHENKO (UKR) started the Ukraninan Women’s gold rush as she took home the gold following a dominant display of power, poise and technique, winning all four of her matches in the series defeating Camila FAMA TRISTAO (BRA) and Georgia GKOUGKOUDI (GRE) in her two matches today.

Mehlika OZTURK (TUR) had won gold in the previous two Beach Wrestling World Series legs in France and Ital, she showed why today with another two wins over GKOUGKOUDI and Denisa Iuliana FODOR (ROM) but her defeat to KRAVCHENKO yesterday meant she had to settle for the silver. Greece’s Georgia GKOUGKOUDI taking home the bronze much to the delight of the home crowd as the medals were presented.

The third Ukrainian Woman’s gold came courtesy of a clean sweep of all her matches by the powerful Iryna PASICHNYK as she defeated Catalina AXENTE (ROU) to make it 3 out of four for the Ukrainian women’s team with AXENTE taking silver and Aikaterini Eirini PITSIAVA taking the bronze.

In the men’s division it was a return to winning ways for Levan KELEKHSASHVILI (GEO, -70kg) after his disappointment in Rome as he emerged from his group to face Pedro Miguel DE MATOS OLIVEIRA DE MORAIS CA in the semi-final which he comfortably won before facing Yunus COSKUN of Turkey in the gold medal match. He emerged victorious with a dominant display and now goes into the last leg in Romania having won 2 of the 3 legs of the Series so far. Romania’s Stefan Ionut COMAN claiming the bronze with a win over DE MATOS OLIVEIRA DE MORAIS CA.

Joining in with his compatriots’ gold rush Vasyl MYKHAILOV (UKR) took the gold in the men’s -80 kg division, coming through the group stages to face the tenacious Buluthan OKSUZ (TUR) in the semi-final. He dispatched of OKSUZ to face Azerbaijani Omid KAMALIAGHDAM who had beaten Georgia’s Davit KHUTSISHVILI in the other semi-final, and narrowly pipped KAMALIAGHDAM, the winning point coming with only 33 seconds left on the clock. Davit KHUTSISHVILI, who is still recovering from a dislocated shoulder can be proud of his bronze despite the injury troubles.

Pakistan’s Muhammad INAM (-90 KG) had made headlines all over the world last weekend as he became Pakistan’s first ever Beach Wrestling World Series Gold medalist and the Pakistani powerhouse followed that up with a second gold in a row as he defeated Beach World Games silver medalist Ibrahim YUSUBOV (AZE) in a final that went all the way to the end finishing 2-2 with INAM getting the result on the tiebreaker of being the lighter man. Mahmut Seyfi OZKAYA (TUR) took the bronze with a win over Ukraines Oleksii YAKOVCHUK.

New Azerbaijani head coach and current +90kg World Champion Oyan NAZARIANI wrestled his way back to form this weekend as he won gold, following his bronze in Rome last week as he edged out Georgian Mamuka KORDZAIA with only 49 seconds left on the clock, with Pakistan’s Zaman ANWAR earning himself the bronze with a win over Ivan MALIN.

All good things must come to an end and although we are sad to be leaving behind Greece, we move onto our next and final stop of the Beach Wrestling World Series as well as the World Championships as we go to Constanta in Romania and the sensational Mamaia Beach on the 25th and 26th of September.

Axel Mazella and Poema Newland have become champions of Gran Canaria, the fifth and final event of the 2021 KiteFoil Wo[..]