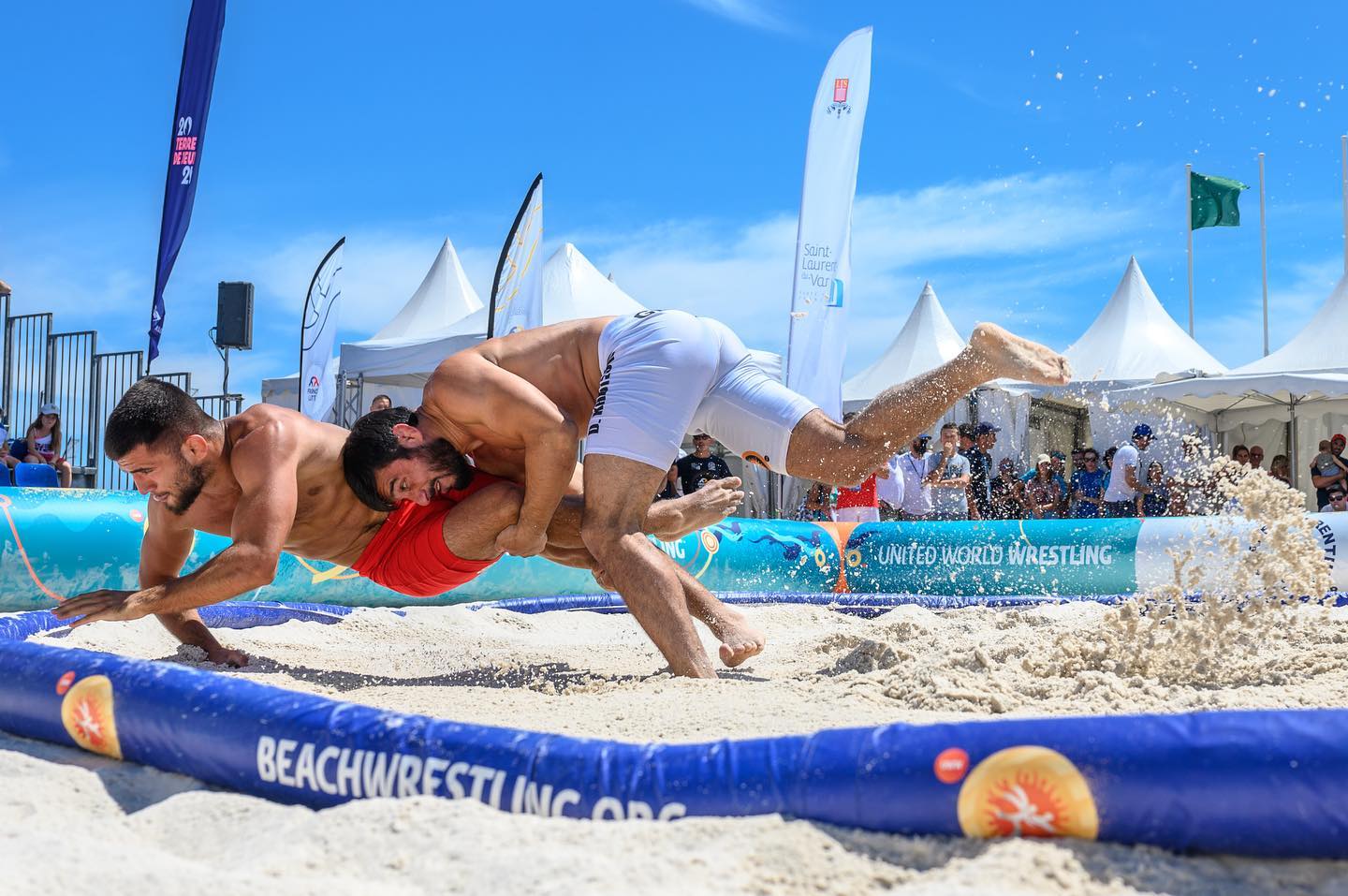 The third stop of the Beach Wrestling World Series brought all wrestlers back to the French riviera. With the sun shining, the music playing and that special Beach Wrestling vibe in the air the crowds were treated to some superb technique, drama and skill as our superheroes in shorts wasted no time in getting the sand flying.

Picking up gold for the first time since entering the Series was Turkey’s Emine CATALOGU (50kg) as she capitalised on the absence of Stefania PRICEPUTU(ROU) to claim the gold, with silver for Justine VIGOUROUX (FRA) and American Laura Elizabeth WHITE taking the bronze.

There was somewhat of a shock in the women’s 60kg. Iryna CHYKHRADZE (UKR) had won the opening two legs of the Series and as she made the final once more, it seemed like she would make it three in a row. It wasn’t to be though as she was stunned by the Spaniard Maria Victoria BAEZ DILONE, who defeated the Ukrainian 2-0 to add gold to the bronze she won on her debut last time out in leg 2. Daria MEDVETSKA (UKR) took home the bronze.

Hatice Ece TEKIN (TUR) had won bronze in leg one of the women’s 70kg, silver in leg two and finally took home the gold to complete her medal set with a fine victory over home sand contender Manon KURY in the final. Kury had delighted the home crowd in the semi-final in which she defeated the fancied Olena NIKITINSKA (UKR) but Tekin was too much for her in the gold medal battle. Nikitinska shook off her semi loss to defeat compatriot Yuliia KREMEZNA for bronze.

With four wins from her four bouts in the women’s +70kg defending champion Catalina AXENTE (ROU) got back on the gold trail and banked those full ANOC World Beach Games ranking points with Liudmyla PAVLOVETS TYCHYNA (UKR) securing the silver having won three of her four bouts. Stefania ZACHEILA (GRE) claimed the bronze.

Georgia’s golden boy Levan KELEKHSASHVILI continued his excellent form as he took the top step of the podium and the gold once again in the men’s 70kg division, this time defeating Yunus COSKUN (TUR) 2-0 in a tense final. For the third consecutive stage of the Series, Ramiz HASANOV (AZE) took the bronze medal.

The opening two legs of the Series saw 2021 World and European Championship Bronze medallist Nika KENTCHADZE (UKR) win a gold and a bronze, battling for the top rank with Omid KAMALIAGHDAM (AZE). It’s now advantage Kentchadze as he picked up the gold in France. He defeated Romanian Maxim VASILIOGLO who had ended the golden dreams of the Azerbaijani Kamaliaghdam to secure his place in the final. The Azerbaijan wrestler returned and had to be satisfied with bronze.

The men’s 90kg division saw more Turkish delight as Mahmut Seyfi OZKAYA took home the win to add to the gold already won by compatriot Hatice Tekin in the women’s 70kg. He defeated the Georgian 80kg World Champion David KHUTSISHVILI with 16 seconds of the bout left to claim the top spot. Azerbaijani Ibrahim YUSUBOV shook off his disappointment at not making the final by winning the bronze.

Only the small matter of reigning World and Series Champion Mamuka KORDZAIA stood in the way of Fatih YASARLI in the men’s +90kg as he looked to make it a quadruple gold haul for Turkey, but he rose spectacularly to the challenge to put the cherry on the Turkish cake and claimed the gold with a 2-0 victory over the Georgian. Rafail GKIRNIS (GRE) claimed the bronze with victory over Luc Rene ZANETTON of France.

In a few days the World Series reaches Katerini (Greece) with more gold medals on the line, as well as all-important ANOC Beach World Games ranking points. Find out about all other Beach Wrestling events on our Beach Sports calendar