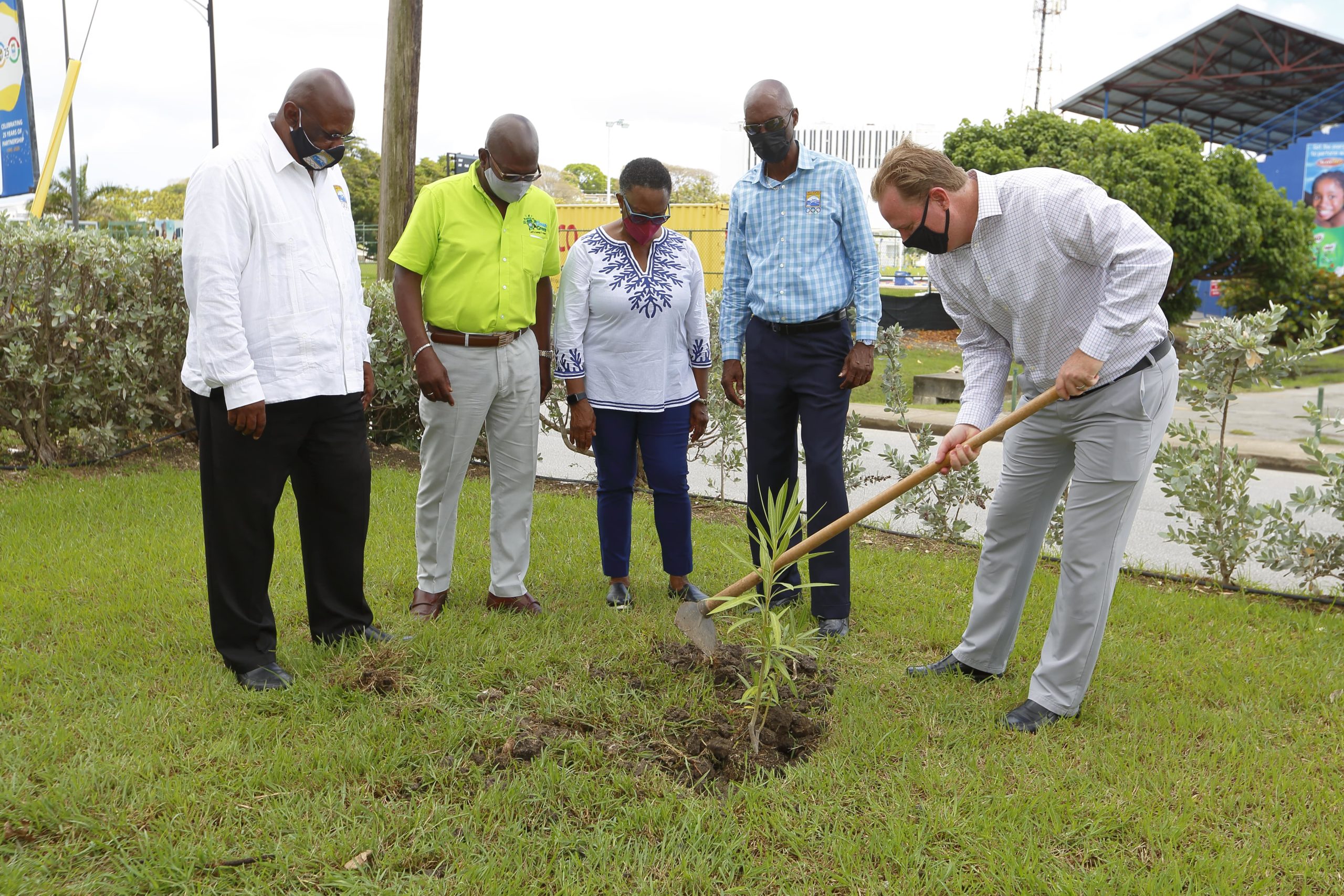 The Barbados Olympic Association’s weeklong slate of activities to commemorate Olympic Day paid homage to the environment and its former Vice President the late Ralph “Bruggadung” Johnson with a tree-planting ceremony held in his honor on the grounds of the Olympic Centre last Thursday.

Director of the National Olympic Academy, Vaneisha Cadogan who coordinated the event, said that it epitomized the ideals of Olympism. “The act of tree planting is consistent with the emphasis of the International Olympic Committee on sustainability and this event celebrates excellence as we commemorate the life and work of an outstanding sportsman and sports administrator,” she said.

The NOC President, Sandra Osbourne explained that tree planting and sports have a synergy since the International Olympic Committee considers the environment as an integral component of Olympism and is committed to the promotion of sustainable development and is leading by example as its headquarters, Olympic House in Lausanne, Switzerland, is one of the most sustainable buildings in the world.

Osborne said, “as recently as last week, the IOC announced a project to plant the “Olympic Forest” in Mali and Senegal as part of its climate-positive strategy. In keeping with the Olympic philosophy to build a better world through Sport, the NOC has included tree planting this year to raise environmental awareness and to highlight the importance of trees to health and combatting global warming.”

Osborne added that the tree planting also commemorated the life of an individual who had made an outstanding contribution to sport and who loved the environment, as was evident by the way he embraced life. The tree planting was therefore a small tribute to this sporting icon and the tree represents a living memorial of his legacy.

The tree-planting ceremony was a joint venture between the NOC and the Ministry of Environment and National Beautification. Speaking on behalf of the ministry, tree specialist, dendrologist, Nigel Jones told the small audience of NOC employees, directors, and officials of the ministry that there is great significance between the tree being planted and the Olympic Movement. “The olive tree is the tree that was originally given to the victors of the Olympics and it is from here that we get terms such as olive branch, so the olive tree is rooted in the history of the Olympics,”

James Johnson, son of the late sports icon Ralph Johnson, planted the olive tree which was witnessed by the NOC President, Secretary General, Vice-President and Public Relations Consultant of the Ministry of Environment and National Beautification.

The NOC intends to continue its tree-planting initiative, planting trees in honor of other outstanding sportspersons.