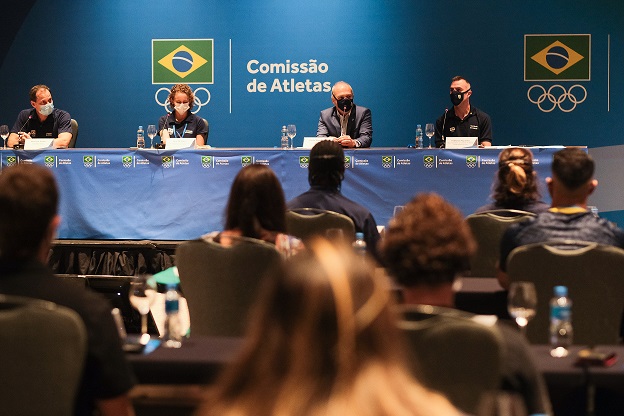 The Brazilian Olympic Committee Athletes’ Commission held the 2nd Forum of Athletes’ Commissions of the Brazilian Olympic Movement. The 2021 edition of the event brought together 42 members from 30 Olympic sports commissions. Others had the opportunity to follow the meeting virtually. The Forum aims to exchange information and strengthen the representation of athletes in sports management.

“We have to be very connected in our rights, duties, skills and responsibilities, as well as which paths to follow, always acting ethically in favor of the most important segment of sport and the Olympic Movement – ​​athletes. We need to live these moments to build together and give, even better, our contribution to the sport”, said Yane Marques, bronze medalist in modern pentathlon in London 2012 and president of Brazilian Olympic Committee Athletes’ Commission.

“Brazilian sport is on a path of good administration, of good governance practices that have no setbacks, sharing desires and interests in favor of the development of the Olympic Movement in Brazil with athletes. We are neither above nor below, we are side by side of the athletes. I arrived at BOC with the objective of opening up more space, giving voice to the athletes and this is the practical result”, said the president of Brazilian Olympic Committee, Paulo Wanderley Teixeira.

The event began this Thursday afternoon, the 18th, and featured a series of presentations. BOC Athletes Commission presented its members, how the meetings and organization of the entity work, the “Mission, Vision and Values” of the entity, the actions that were carried out, among other things. Subsequently, lectures were held on “Athletes’ Commission and their Rights” and the “Compliance program”. This Friday, 19th, the second day of the event had presentations on “Communication, Marketing and Olympic Values”, “Closing of the 2017-2020 Cycle and the Paris 2024 Olympic Games Perspective” and, finally, the members of the Athletes Commission presented the “Problem solving process within the CACOB” with practical cases.