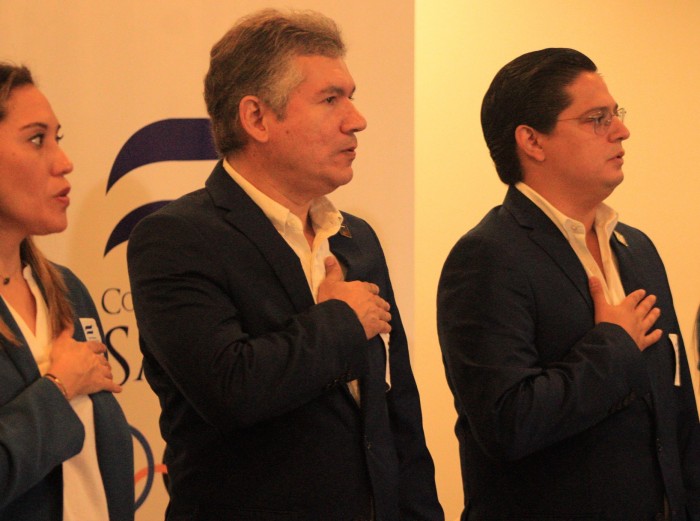 The Extraordinary General Assembly of the Olympic Committee of El Salvador (COES) was held in a San Salvador to discuss a number of important matters.

Before starting the assembly, Roberto Calderón, secretary general, offered a few words of welcome; “The main vocation that must exist among us is that of service. The greatest success we have is when we discover the mission that we have.”

He added “the one who is not prepared is very difficult to reach a goal. What is your work plan, your goals and if we don’t integrate the Olympic values ​​and Olympism, we won’t have a plan”.

In addition, Calderón outlined the items on the agenda that were going to be carried out in the assembly. “New situations will be announced, such as; the COES athletes commission, the figure of a prosecutor, who will be in charge of ensuring compliance with the Olympic Charter and the COES Statutes, among others”.

Following the words of Roberto Calderón, secretary general, and the presentation of the personalities, the athletes entered, Edith Quintanitlla (bowling) and Luis Nóchez (skating) carrying the flag of El Salvador, while the national anthem was sung. Then with the Olympic anthem they entered; Loida Pastor (Special Olympics), Israel Gutiérrez (Shooting) and Jorge Merino (Karate), carrying the flag of the Salvadoran Olympic Committee.

Next, Roberto Calderón verified the quorum of presidents and having 50% plus one, he declared the Extraordinary General Assembly to have begun.

Immediately afterwards, Armando Bruni, president of the COES, made the opening remarks; “I am proud to be standing in front of you presiding over this assembly. These first few months have really been quite hard work, and if I can express it to you in any way, it is that we have tidied up the house. We have drawn up a strategic plan that covers three Olympic cycles (Paris 2024, Los Angeles 2028 and Brisbane 2032)”.

He added “El Salvador lacks sports results and we have a great responsibility with the Central American and Caribbean Games San Salvador 2023.” In addition, President Bruni said “I want to remind you of the importance of the ratification of our statutes. This has been evacuated with the legal part of the International Olympic Committee; and that is why with the observations of the IOC we are carrying out this Assembly.”

“For the first time in El Salvador, athletes will be recognized and that is why the Athletes Commission was formed, as I said at the beginning, they are the axis of the strategic plan.” After President Bruni’s words, the formally with the agenda items.

The first item on the agenda was to approve the minutes of the Ordinary General Assembly held on March 26, 2022. The minutes were approved unanimously.
The second point was the ratification of the COES Statutes. These were also unanimously approved by the general assembly of the COES.

This is a very important point given that the approval of the statutes of the COES is where the goals and objectives, the principles for good governance, the legal certainty of the COES and the ordering of the structures are established. What gives existence to the prosecutor, the justice and honor commission and the Athletes Commission, which will be registered in the National Registry of Sports Federations and Associations and before the IOC. The third point was the approval of the regulations of the athletes’ commission. Unanimously approved by the assembly members. Immediately afterwards, Salvador Salguero, vice president of COES, presented the athletes that will make up the commission and to finalize the point of the commission, President Armando Bruni swore in the members of the newly formed athletes commission. On the other hand and continuing with the agenda, Gloria Ramos, treasurer, spoke for the ratification of the appointment of External Auditor and Fiscal Auditor of the COES, ratifying the company AMP Asesores de Tributos y Auditores de El Salvador SA de CV, which was selected under technical criteria and the company complied with what was required. . Thus, he also presented the consolidated support for athletes and federations for the year 2022. Both points were approved unanimously.

As the last item on the agenda, President Bruni presented three programs; two aimed at presidents of national sports federations and one for coaches. One of the programs aimed at presidents of federations is called “Special Training Program” in this program the objective is to touch one of the pillars of the strategic plan and that is education, what we want is to reach the presidents so that they can have a excellent sports administration and strategic planning.

The following program dedicated to coaches is strictly for the coaches of San Salvador 2023; with the aim of reinforcing the knowledge of national coaches ahead of the San Salvador 2023 Central American and Caribbean Games. The last program presented by President Bruni is dedicated to the presidents of federations in support of international promotion, with the aim of internationally manage resources, training, among other support for their federations.

“There will be requirements to receive the support, for example, to be trained by the COES, we will need the invitation of your international federation, the agenda of the assembly and a report of what you did during the assembly”; explained Bruni, president of COES.

He added “The program will be open to everyone, but we need to see the results.”
Before ending the assembly, Aída Granillo, president of the Salvadoran Bowling Federation, indicated that; “I am very happy and I congratulate you for what you have achieved, I appreciate the work of the COES, and for that I ask for applause for this management”.
After that, the Extraordinary General Assembly of the Olympic Committee of El Salvador was concluded.