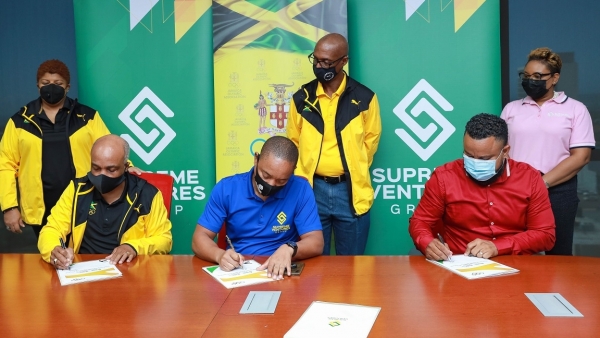 The Jamaica Olympic Association (JOA) has sealed with Supreme Ventures Limited (SVL), a local lottery, gaming and entertainment company, a three year partnership deal  a move which President of the NOC, Christopher Samuda, has described as “historic and a signal investment in sport.”

The forty-five million partnership will benefit several sports and reflects the policy of the JOA to diversify its corporate revenue base as it meets the developmental initiatives of a growing membership.

President Samuda at the press conference called recently to announce the partnership, said that the partnership “embodies a mutual commitment to use sport to inspire aspirations and to fuel ambitions of a generation of enterprising youth in motion in sport.”

Emphasising the value of the partnership other than its financial component, President Samuda stated “this partnership is denominated in words of trust, trust that together, JOA and SVL, can give life-giving blood to sport in oxygenating and transforming lives being lived in sport.”

The JOA in its policy framework has made it clear that the principles and ideals of Olympism inform its work and this approach President Samuda encapsulated at the press conference when he said: “the Olympic values and ideals will characterise this partnership for the benefit of countless athletes and sport federations and  through our “Olympic Invest” programme, will give pursuits in sport hope to the hopeless, courage to the discouraged, faith to the faithless, dreams to the undreamt, possibility to the impossible, realism to the unreal and victory in conquering emotions of defeat.”