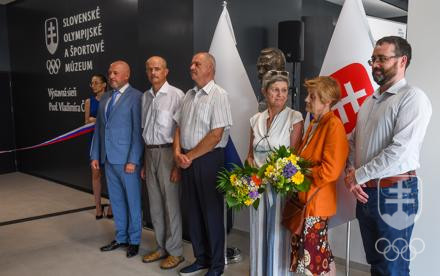 The Slovak Olympic and Sports Committee (NOC Slovakia) has started a new chapter in its history as it has returned to the House of Sports in Bratislava to run its operations.

The NOC will be based out of the two upper floors of the building, which in its original form has served the needs of the sports movement in Slovakia since 1983.

The ground floor of the House of Sports is dominated by the exposition of the Slovak Olympic and Sports Museum (SOSM), which has finally acquired exclusive exhibition spaces. The exhibition hall is named after Vladimír Černušák, the first chairman of NOC Slovakia in 1992-1999 and the first Slovak member of the International Olympic Committee in 1981-2001. Upon entering the exhibition hall, a bust of this very important personality of the Slovak Olympic and sports movement was unveiled by the president of the NOC Slovakia Anton Siekel and the daughter of Vladimír Černušák.

The historical first permanent exhibition of SOSM, the only specialized Olympic and sports museum in Slovakia, has a very modern design and, in addition to valuable artifacts, makes extensive use of modern technology and interactivity. “We value our history and we want to build our future with respect to it. The premises of the Slovak Olympic and Sports Museum are dignified and at the same time attractive for the young generation, “said Anton Siekel, President of the NOC Slovakia, in his introductory speech.