On behalf of HRH Prince Abdulaziz Bin Turki ALFAISAL, President of the Saudi Olympic and Paralympic Committee (SOPC), HH Prince Fahad Bin Jalawi signed the UNFCCC Sport For Climate Action Framework, which allows the SOPC to become an official signatory of the UN Framework as the SOPC took part at the Saudi Green Initiative.

The forum held in Sharm El-Sheikh, Egypt, ran under the patronage of HRH Prince Mohammed Bin Salman Bin Abdulaziz Al Saud and addressed the climate challenges in the kingdom, plans, and achievements of 39 Saudi stakeholders to achieve the goals of SGI and the 2030 vision.

Prince Fahad expressed his gratitude to the prominent efforts of SGI under the leadership of Prince Mohammed Bin Salman that contributed toward enticing climate actions and sustainability in Saudi Arabia.

HH affirmed: “the climate crisis is a call of action for all of us to combat climate change through all levels. SOPC is working on expanding the scope of climate actions in the kingdom to be extended to the sport level to contribute to finding solutions for the climate crisis in and through sports at the international, regional, and national levels”.

HH added: ” it is our responsibility to spread awareness about the climate issues and address them through sport as well as join the forces of all sports organizations in the kingdom to play a vital role that helps achieve the goals of SGI and 2030 vision”. 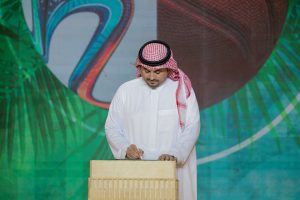