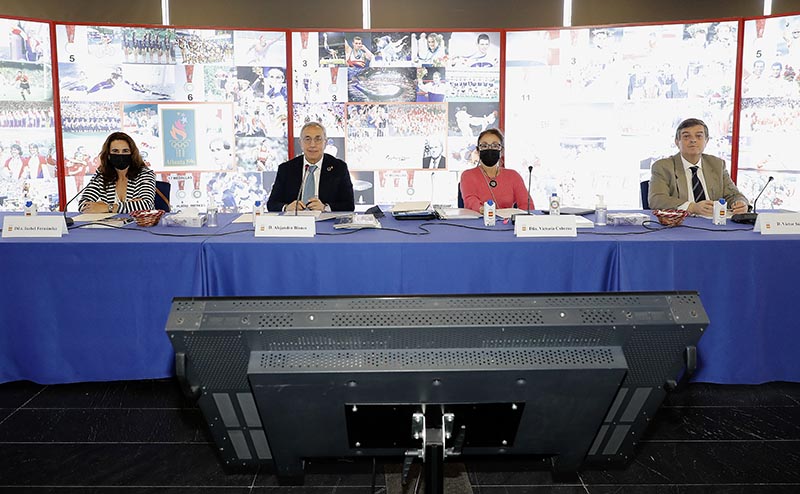 The Spanish Olympic Committee (COE) Executive Committee and Delegate Committee held its first in-person meeting of the year on 25 May at the Goyeneche Auditorium.

The session, as usual, was chaired by the president of the Spanish Olympic Committee, Alejandro Blanco, and was attended by 19 members of the COE body.

During the development of the meeting, the Activitiy Report of the Olympic body was discussed, among other issues, highlighting the joint press conference between the Ministry of Culture and Sports, the Ministry of Health, the Ministry of Defense and the COE to announce the vaccination of athletes who will go to Tokyo 2020; the celebration of the Board of Olympic Federations where Saúl Craviotto and Mireia Belmonte were named as standard bearers of the Spanish Olympic team; the meeting with the Minister of Agriculture, Fisheries and Food, Luis Planas to promote Spanish food in the next Games; the meeting with the Spanish technicians, referees and judges to inform them that they will go to Tokyo vaccinated; the two new Camino al Olimpo events with the basketball and athletics federations as protagonists;

The members of the Executive Committee have taken advantage of this new session to address the latest news regarding the Tokyo 2020 Olympic Games that will start in less than two months. Likewise, in the V-21 session, the Electoral Regulations 2021 have been unanimously approved to cover the five positions of summer athletes reserved in the COE Assembly and the development of the Ordinary General Assembly that will take place this Wednesday 26 of May at the headquarters of the Spanish Olympic Committee.

Before concluding the meeting, Alejandro Blanco informed all members of the executive of the start of the vaccination of the Olympic family and thanked the President of the Government, Pedro Sánchez, the Minister of Culture and Sports, José Manuel Rodríguez Uribes, to the Minister of Health, Carolina Darias, and Minister of Defense, Margarita Robles, the work they have done to ensure that the Spanish delegation can finally go to Tokyo vaccinated.