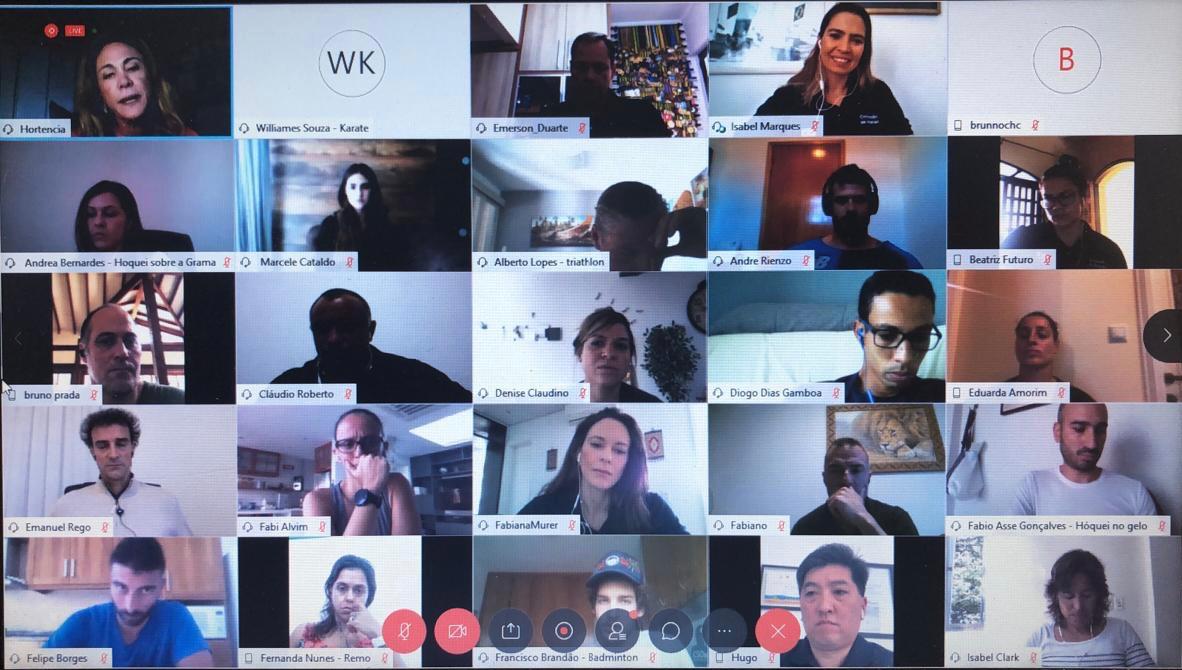 “A milestone for Brazilian sports”. That was how Tiago Camilo, twice an Olympic medalist and president of the COB’s Athletes’ Commission, defined the first Forum of Athletes’ Commissions of the Brazilian Olympic Movement, held on this Tuesday, June 23rd, date on which the Olympic Day is celebrated. The event was attended by all Athletes’ Commissions of the Brazilian Olympic Confederations, with an audience of 88 people in the virtual room, and was also broadcast live on Brazil Team’s channel on YouTube, with more than 400 hits. The goals of the meeting were to exchange experiences and increase the engagement of athletes in the pursuit of sports development in the country.

“Today is a milestone for Brazilian sports. Today is a milestone for all Athletes’ Commissions to come. Every walk begins with a small step. And everyone who participated in this forum can take that first step within their commissions. I would like to thank the Brazilian Olympic Committee, President Paulo Wanderley, Rogério Sampaio and everyone else who took part in the carrying out of this forum” said Tiago Camilo, silver medalist in Sydney 2000 and bronze medalist in Beijing 2008, in judo.

The Forum started with a presentation of the work that has been developed by the collegiate in recent years. All members of the Commission had the opportunity to introduce themselves and talk about their roles within the organization. Then, it was the turn of BOC’s managers, Soraya Carvalho (manager of the Brazilian Olympic Institute), Jorge Bichara (BOC’s Sports director) and Antônio Carlos Moreno (BOC’s master coach), in addition to the Olympic vice-champion Bernard Rajzman, member of the IOC, to talk about the projects aimed at the athletes that they lead on a daily basis.

The current management of the Brazilian Olympic Committee has worked in harmony with the entity’s Athletes’ Commission, seeking to meet all requests from the collegiate. As soon as he assumed the presidency of the BOC, Paulo Wanderley increased the representativeness of the Commission within the entity’s assemblies and votes, jumping from 1 to 12 votes. In 2019, during the Extraordinary General Meeting, a new increase was approved: in the cycle from 2021 to 2024, the Athletes’ Commission will be composed of 25 members, with 19 of them being able to vote.

“We are very happy with our first Forum. I believe that this was our kickoff, given with praise and dignity. In general, it was extremely positive”, said Yane Marques, vice president of the BOC’s Athletes’ Commission and Olympic modern pentathlon medalist in London 2012.

The first Forum of Athletes’ Commissions of the Brazilian Olympic Movement is part of the Olympic Day program, which celebrates the IOC’s founding anniversary. In 2020, the BOC has extended the celebrations for 30 days, transforming it into the Olympic Month, with the purpose of encouraging people to develop Olympic values.