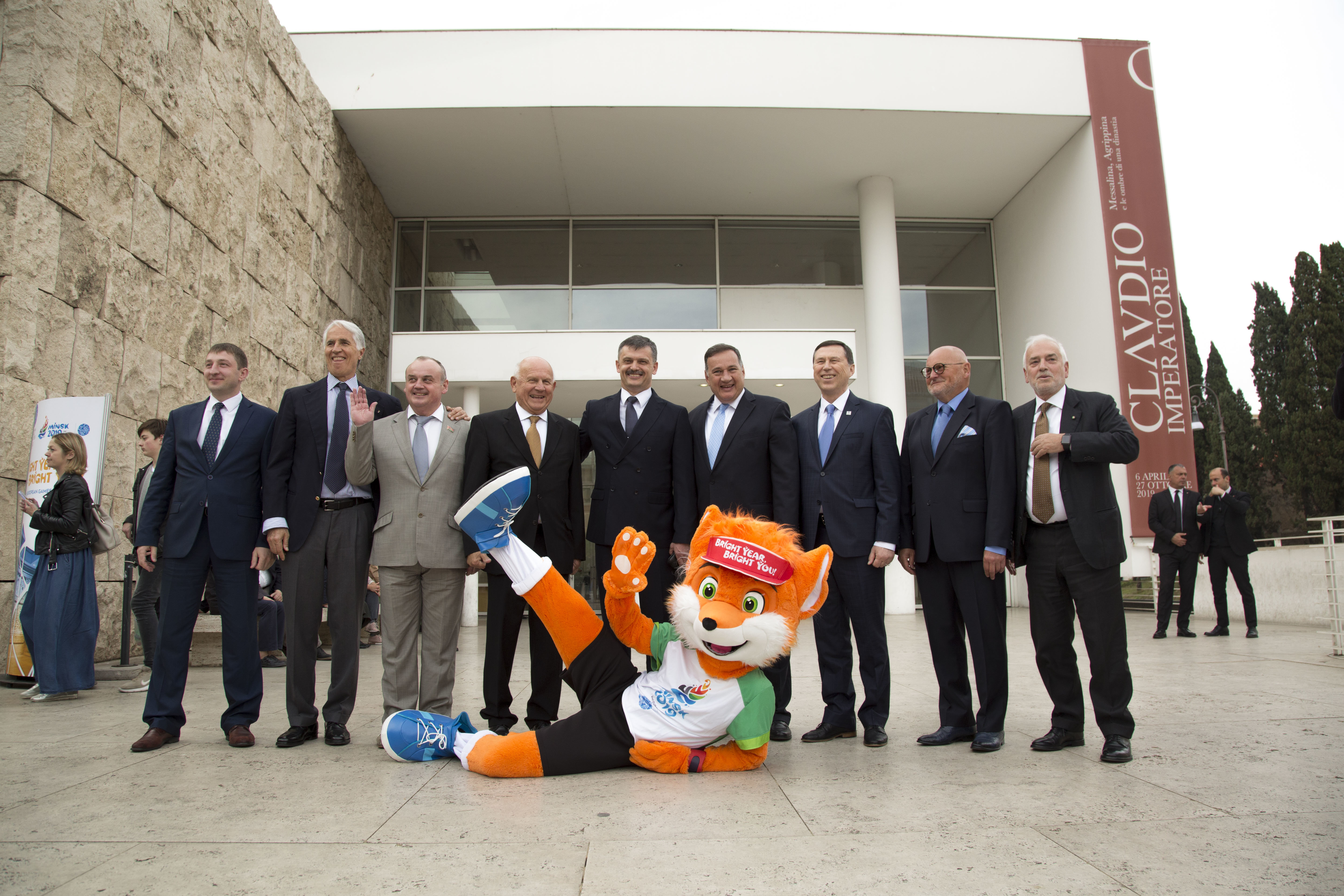 The Flame of Peace for the 2ndedition of the European Games was lit today at the historic Ara Pacis in Rome, marking the start of an international torch relay that will culminate at the Opening Ceremony in Minsk, Belarus on 21 June.

Representing Minsk 2019 and the government of Belarus were CEO of the Minsk European Games Organising Committee (MEGOC) George Katulin and Belarusian Minister of Sport and Tourism Sergey Kovalchuk.

“Today marks 49 days to go until the Opening Ceremony of the European Games in Minsk,” said EOC President Kocijančič. “We are trying hard to create a multi-sport event that will be second only to the Olympic Games. We are at the last stage of preparations and I can tell you that we are very satisfied and are looking forward to an excellent Games in June.”

Representatives from Minsk 2019 were presented with The Dea Pax Golden Olive Tree sculpture–a symbol of peace and friendship whose branches represent the unfolding of the EOC umbrella to receive athletes from all European National Olympic Committees (ENOCs).

The olive tree was considered sacred by Dea Pax, the Roman goddess of peace, and the sculpture, made by the renowned sculptor and goldsmith Nicola Amato, was designed in homage to these values.

Prior to the Lighting Ceremony, the EOC held a press conference that was live-streamed on its social media channels and included questions from journalists around the world.

“Minsk is ready to host the Games,” said CoCom Chair Capralos, who added that the Athletes’ Village is one of the best he had ever seen. “You can really feel the enthusiasm of the local people and the volunteers, who are ready to offer their services for the success of these Games. In 49 days we will see that these European Games will be a big success.”

Before making its way to the Belarusian capital, the Flame of Peace will be brought to the top of Mont Blanc by members of the Belarus Mountaineering Federation. It will then make its way through Austria, Czech Republic, Hungary, Poland, Slovakia, and Slovenia en route to Belarus.

The Flame will be accompanied on its journey by a caravan of 23 motorcyclists from “The One Chapter Belarus.” The biker club left Minsk for Rome on 27 April for its historic mission.

In total, the Flame of Peace will travel around 7,700 km, with the goal of raising awareness of the European Games and telling the world about Belarus. The flame will conclude its journey at Dinamo Stadium in Minsk, where it will be used to light the European Games cauldron. The Torch Relay is expected toinvolve450 torchbearers, 100 volunteers and 10 flame keepers.

“Today is a really important day for us because for all intents and purposes it means that the 2ndedition of the European Games have started,” said MEGOC CEO Katulin. “This long journey, more than 7,000 kilometres, will lead us from the capital of European sport, Rome, to the capital of our Republic, where people are waiting for the 21June and the Opening Ceremony with great enthusiasm.”

Eight of the 15 sports will act as qualifiers for the Tokyo 2020 Olympic Games, with the European Games also counting as the official European championships for two sports.