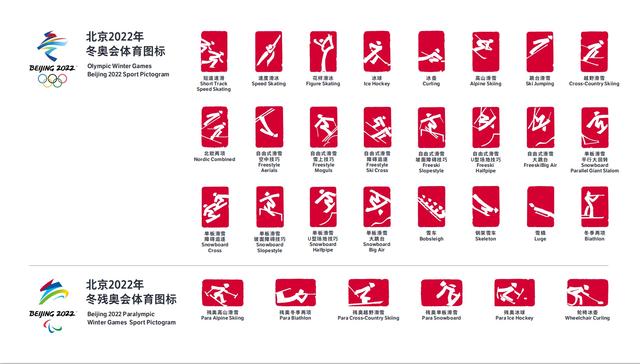 The 24 pictograms for the Olympic Winter Games, which have been inspired by traditional Chinese seal engraving, identify each of the disciplines across the seven Olympic winter sports. However, freestyle skiing and snowboarding are allocated six and five icons respectively due to differences in the equipment and courses used in these disciplines. Six symbols identify the sports of the 2022 Paralympic Winter Games.

Designed based on the traditional art form of seal engraving, each of the pictograms depicts its respective discipline with unique strokes – like those carved with a knife on Chinese seals dating back to the Qin and Han dynasties. The pictograms embody both the motion of winter sports and China’s rich culture in modern graphics. According to the organisers, the sharp contrast between the red background and the white strokes also highlights the grace and dynamism of winter sports, as well as adding a festive vibe to the Games, which will echo with the Chinese Lunar New Year in 2022.

“The release of the sports pictograms marks the progress in our preparations for the Olympic and Paralympic Winter Games Beijing 2022 over the past year in a visually strong fashion,” said Gao Tian, Deputy Director of the Culture and Ceremonies Department of the Beijing 2022 Organising Committee. “It’s another example of presenting time-honoured Chinese art in a modern way and integrating the quintessence of Chinese culture into sports presentation on the Olympic and Paralympic stage.”

The pictograms were developed in line with the style of the 2022 Games’ emblems, with both graphic elements designed by the same group led by Lin Cunzhen, an associate professor at the China Central Academy of Fine Arts. Drawing on inspiration from the Beijing 2008 pictograms, the 2022 versions also incorporate the art of calligraphy.