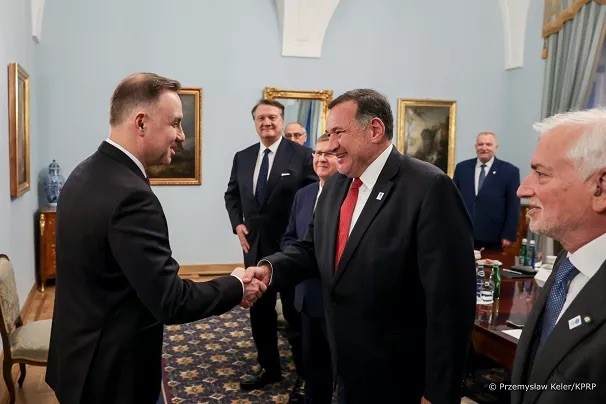 President of the European Olympic Committees (EOC) Spyros Capralos yesterday met with President of the Republic of Poland Andrzej Duda to discuss preparations for the Games.

Speaking after his meeting with President Duda, President Capralos said: “The EOC is deeply grateful for the hospitality that will be shown to Europe’s leading athletes by our friends in Poland this coming summer. I was very happy to express this gratitude directly to President Duda. For two weeks, Poland will be a focal point for the hopes of people from all across Europe and we have no doubt that they will be impressed by what they experience.”

Kraków Małopolska 2023 will take place from 21 June – 2 July 2023. It will be the biggest multisport event in Europe since London 2012. Around 7,000 athletes compete across 25 sports. 18 of which are Olympic and offer qualification opportunities for the Olympic Games Paris 2024.

Speaking after key meetings with the Local Organising Committee and the Marshal of Małopolska region Kozłowski, Mr Arat said: “The progress that has been made by the Organising Committee and local authorities in preparing for Krakow Małopolska 2023, in only a short time, has been deeply impressive. For this, I would like to warmly thank the Marshsal of Małopolska who is being instrumental in the lead-up to the Games. Maintaining this pace will be vital. The EOC is also very conscious of the way Poland is preparing to welcome athletes from all over Europe at a time when they have already welcomed so many of their neighbours because of the war. We have worked hard to ensure these are sustainable Games, using an existing footprint of facilities and leaving a legacy of renovated facilities for the local communities.”

During the visit to Warsaw, the EOC delegation also met with the Minister of Sport and Tourism of the Republic of Poland Kamil Botniczuk, who emphasized the significance of hosting Europe’s biggest multisport event in the country. European Games will show the strength of sport, the importance of solidarity and being prepared to win and lose, but always united to face the new challenges of the current period.

The EOC leadership also attended the Polish Olympic Committee’s New Year Gala, where they praised the Polish team’s success at the European Games and highlighted the importance of converting the interest that will be generated by the Games into long-term sporting participation at all levels.