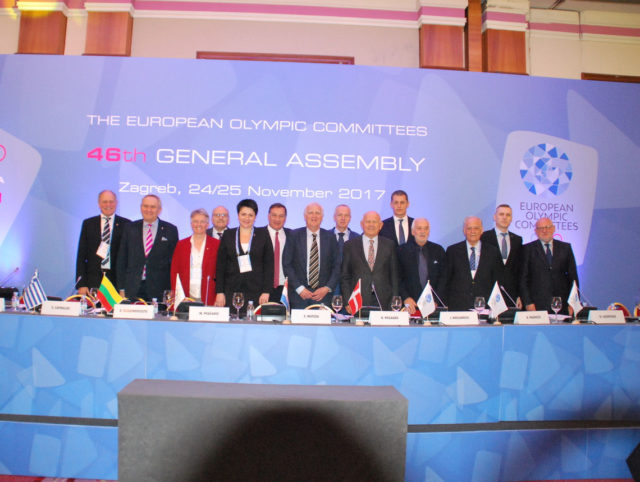 KOCIJANČIČ ELECTED AS PRESIDENT OF THE EUROPEAN OLYMPIC COMMITTEES

Janez Kocijančič has been unanimously elected as the European Olympic Committees (EOC) President for the 2017-2021 quadrennial on the first day of the 46th annual two-day General Assembly.

Slovenian Kocijančič, who has led the EOC as Acting President for the past 15 months, was the sole candidate for the position and was unanimously elected by acclamation of the General Assembly of the 50 European National Olympic Committees. Italian Raffaele Pagnozzi and Cypriot Kikis Lazarides were re-elected unopposed for their positions as Secretary General and Treasurer. Denmark National Olympic Committee (NOC) President Niels Nygaard was elected as Vice-President ahead of the President of the Netherlands NOC André Bolhuis.

“I am honoured to be elected to lead the European Olympic Committees over the next four years. The EOC have the opportunity to achieve great things in the near future, and I will work hard with the newly elected Executive Committee to ensure the EOC reaches its potential. The election of the new Executive Committee marks a great opportunity to reflect on the successes of the past four years, but also gives us the chance to look at how our past successes can help us continue to improve in the future. The second edition of the European Games in Minsk in 2019 will be a very important event for the EOC and I am confident that it will be a demonstration of the amazing things that can be achieved in European sport.”