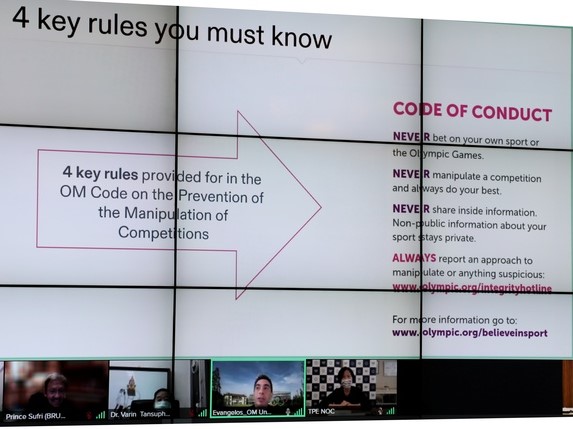 The Olympic Council of Asia stepped up its efforts to prevent the manipulation of competitions by holding a joint webinar with the International Olympic Committee on 29th September.

The webinar included presentations from the United Nations Office on Drugs and Crime (UNODC), INTERPOL and the Council of Europe, as well as from the OCA and the Olympic Movement Unit on the Prevention of the Manipulation of Competitions (OM Unit PMC).

In his opening remarks, the OCA Director General, Mr Husain Al Musallam, said it was a good opportunity for Asia’s National Olympic Committees to join an international webinar on such an important topic.

“The Olympic Council of Asia began working closely with the International Olympic Committee months ago and the OCA has already gone through the activation process and adopted the rules through the code that went into force on 7th May, 2021,” said Mr Al Musallam.

“Awareness-raising is also an important part, therefore, the OCA decided to conduct this important webinar with the IOC today. The OCA is always at your disposal, with the IOC working together to help you, as NOCs, to start the activation process and to fight together against the manipulation of competition.”

IOC Vice-President Mr Ng Ser Miang of Singapore welcomed the participants on behalf of the International Olympic Committee and congratulated the OCA on organising such an important initiative.

“The phenomenon of competition manipulation is a very significant threat for the integrity and credibility of sports competitions. No country and no sport can be immune from this threat,” said Mr Ng, who is Chair of the OCA Advisory Committee and a member of the OCA Executive Board.

“It is the NOCs’ responsibility to take actions in line with the Olympic Movement’s code on the prevention of manipulation of competitions and be ready to tackle any such threats. We are very happy to note that the Olympic Council of Asia has adopted this code since May this year.

Tony Tarraf, Head of the Athletes Development Department and Special Projects at the OCA, said raising awareness was key to prevention and that Asia had four ambassadors but needed more. He added that the OCA integrity sporting mechanism was accessible to anyone at any time to confidentially report any suspicious actions.

The second session was themed “Working with national stakeholders in the prevention of the manipulation of competitions” and featured presentations from the United Nations Office on Drugs and Crime (UNODC), INTERPOL and the Council of Europe Convention on the Manipulation of Sports Competitions.