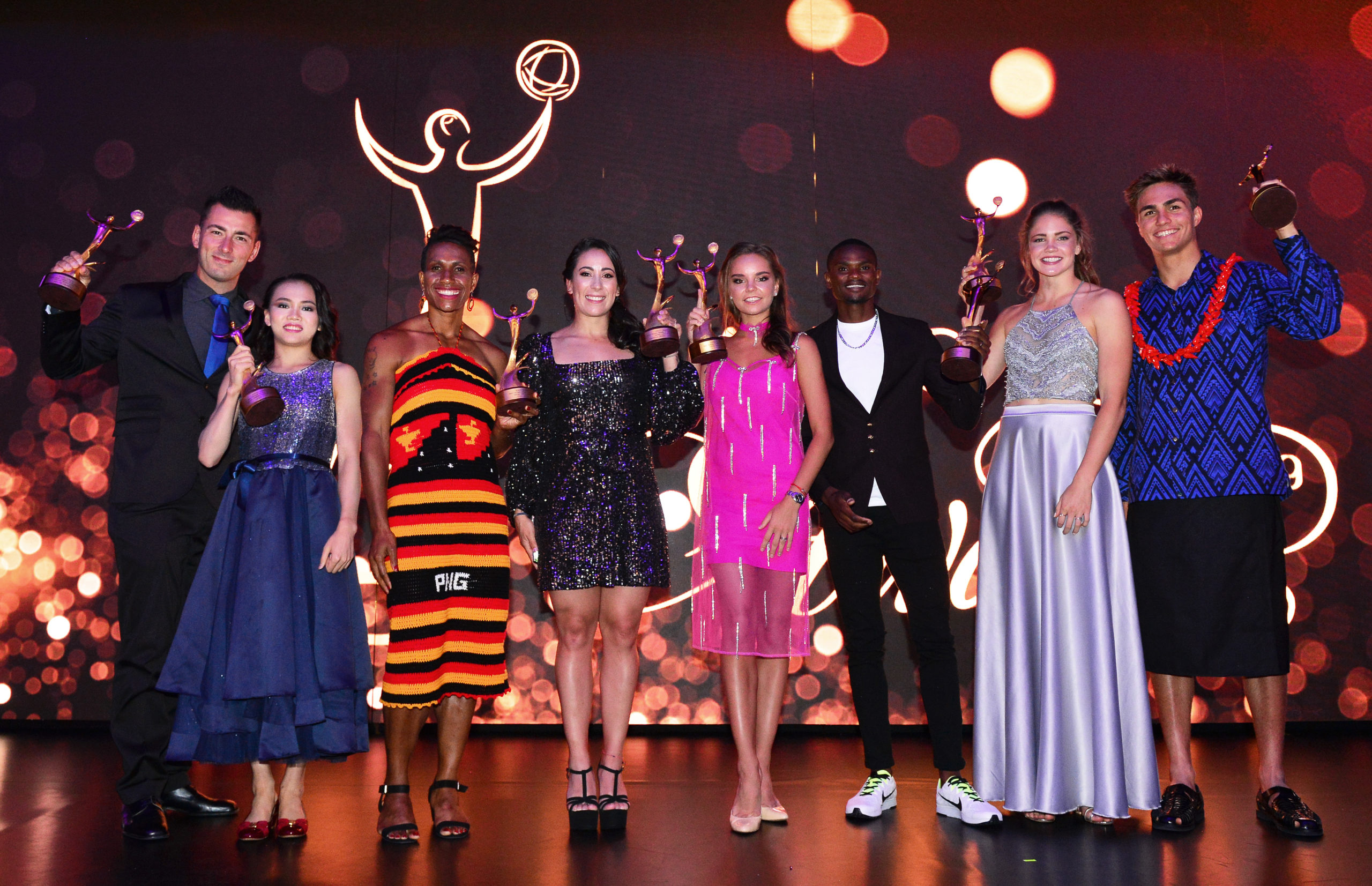 Doha, Qatar; 17 October 2019: The best male and best female athletes from the five Continental Games were honoured tonight as part of a global celebration of National Olympic Committees (NOCs) and their athletes during a spectacular sixth edition of the ANOC Awards.

The world gathered in Doha’s multi-purpose Katara Hall venue, in the Katara Cultural Village, to recognise the outstanding achievements of athletes during the five Continental Games that have taken place over the past 18 months. Earlier in the week, Katara Cultural Village demonstrated its flexibility as a world-class venue as it successfully hosted more than half of the inaugural ANOC World Beach Games disciplines.

Over the past 14 months, the five Continental Associations have each successfully hosted multisport Games. The Asian Games Jakarta-Palembang 2018, the European Games Minsk 2019, the African Games Rabat 2019, the Pan American Games Lima 2019 and the Pacific Games Samoa 2019 were all of the highest standard and provided long-lasting memories for athletes, fans and NOCs. The Continental Games have been integral to NOCs, offering vital experience and qualification opportunities for their athletes ahead of the Olympic Games in Tokyo next year.

The ANOC Awards winners for 2019 are:

Four individual special awards were also presented during the Ceremony:

Representatives from 204 NOCs and stakeholders throughout Olympic Movement attended the event, which was once a truly global celebration of sport. The ANOC Awards was created to thank NOCs and their athletes for their dedication to the Olympic Movement. Athletes, NOCs and International Federations were actively engaged in the ANOC Awards across all social media platforms throughout the evening, as the event illustrated the power of sport to unite different nations and cultures.

The awards ceremony was broadcast live in Qatar by Al Kass, with highlights distributed to broadcasters all around the world. The event was also streamed live on the ANOC YouTube Channel, enabling the entire sporting world to enjoy the breath-taking combination of sport and culture on show.

Quotes of the winning athletes:

Chen Yile recipient of the ANOC Award for Best Female Athlete of the Asian Games, said:

“I am honored to be named the Best Female Athlete of the Asian Games, and to join the long line of incredible athletes who have received an ANOC Awards. I would not have been able to accomplish my goals without the participation of countless other individuals, so this award is just as much a reflection of my incredible support system. Thank you ANOC for this award, this is a night I’ll never forget.”

“I am so humbled to win the Best Male Athlete of the Asian Games award. First, I would like to thank the ANOC for the recognition. Winning the individual jumping event in equestrian at Jakarta 2018 is one of my greatest career accomplishments, and this award only adds to the memory. I look forward to building off this achievement and growing the relationships created from this wonderful event.”

Dina Averina, recipient of the ANOC Award for Best Female Athlete of the European Games, said:

“The Minsk 2019 European Games was full of world-class competitors, and for me to end the event with three golds and five total medals was something dreams are made of. Thank you ANOC for the special award and for this amazing celebration of sport. Being recognised tonight along with the world’s best athletes shows the impact sports can have both at an individual level, and across the world.”

Mauro Nespoli, recipient of the ANOC Award for Best Male Athlete of the European Games, said:

“Receiving the Best Male Athlete of the European Games award is an extraordinary compliment from such a global organisation. I work hard every day not only to be successful in competitions and a credit to my team – but to be a good teammate and set a positive example. I am incredibly thankful for the platform ANOC has provided me, and for the opportunity to give back to so many.”

Erin Gallagher, recipient of the ANOC Award for Best Female Athlete of the African Games, said:

“2019 will be one of the most memorable years of my life, beginning with the Rabat 2019 African Games. I never dreamed of winning 10 medals , and it was an experience I’ll cherish forever. Then to be recognised by ANOC is an unbelievable honor. Thank you to all those at ANOC involved in putting together this amazing celebration. I know I’m here receiving this award, but there should be a line of people standing alongside of me because my success doesn’t exist without them.”

Sydney Siame, recipient of the ANOC Award for Best Male Athlete of the African Games, said:

“To be even considered for this illustrious award is a blessing and so to win it is amazing. I am so appreciative of my family, my teammates, the Zambian National Olympic Committee and ANOC for all of their support. Being a great athlete means more than just winning competitions, and I hope that I can be a source of encouragement to others.”

“Just over a year ago, I could not have thought I would be winning the ANOC Award for Best Female Athlete of the Pan American Games. The road to recovery from my knee injury has been extremely difficult, but the reward has been sweet. I’ll never forget the feeling when I crossed the finish line first in Lima against the best athletes of the Americas. It is a privilege to be here in Qatar receiving this award, and I would like to thank ANOC for hosting such a wonderful event.”

“Sports are vital to culture in Cuba, with boxing among the most popular. As a kid, I looked up all the premier boxers in my country. So, when I began my career, I set a goal to become the greatest boxer I can be, and winning the Best Male Athlete Award of the Pan American Games is an amazing reminder that years of hard work has paid off. Thank you to ANOC for this award, and I hope it can serve as inspiration to the next generation of Cuban boxers.”

Toea Wisil, recipient of the ANOC Award for Best Female Athlete of the Pacific Games, said:

“There’s a sense of overwhelming pride to be recognised as the Best Female Athlete of the Pacific Games. I competed in my first Pacific Games in 2007, and to still represent Papua New Guinea and win at a high-level 12 years later is a privilege. I would like to thank ANOC for this award, and for the bringing together so many inspiring people.”

Brandon Schuster, recipient of the ANOC Award for Best Male Athlete of the Pacific Games, said:

“Being a member of the most successful Samoan swimming team at the Pacific Games is one of the crowning achievements of my career, and for me to contribute 5 medals while the games were hosted in my home country makes it that much more special. I would like to thank ANOC for gifting me the Best Male Athlete of the Pacific Games award, an honor that goes beyond me and is for the thousands of people from all over the country.”