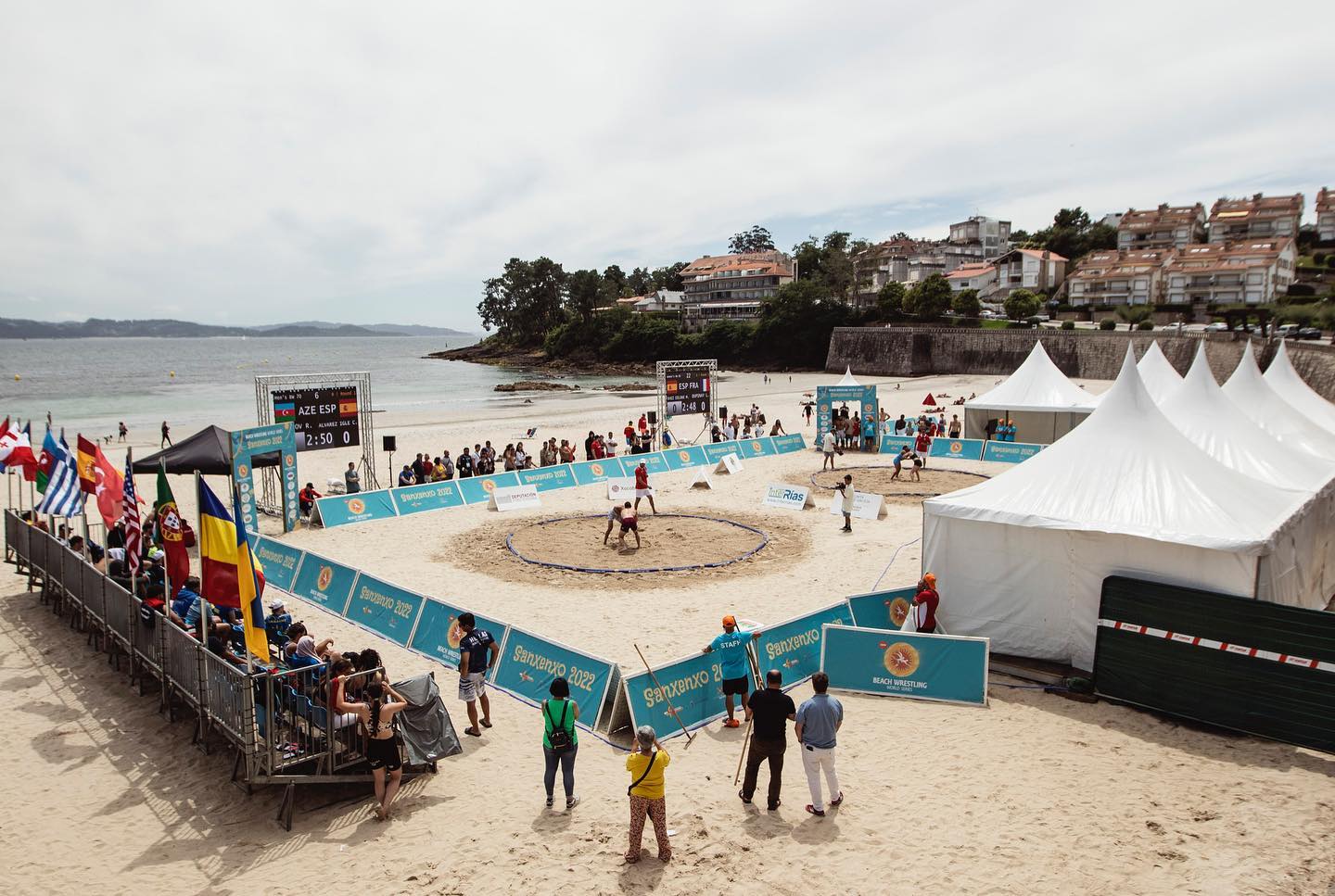 In the second leg of the 2022 Beach Wrestling World Series, the Ukrainian women and the Georgian men took home three from four golds

The second stop of the Beach Wrestling World Series brought all wrestlers to brand-new grounds in the north of Spain. The famous Silgar beach in the Galician city of Sanxenxo welcomed wrestlers from 12 nations.

First up was the women’s 50KG, where Stefania PRICEPUTU (ROU) faced up against home sand opposition in the shape of Cristina OJEDA (ESP) in the final as the only two participants in the weight division this leg.

The 23-year-old wrestler took the lead within the first 30 seconds. With a minute twenty left on the clock, she doubled her point advantage and sealed another gold medal, driving Ojeda into the sand to make it two leg wins from two for the princess of power.

In the women’s 60KG division, it was bronze for Maria Victoria BAEZ DILONE (ESP) as she wasted no time in securing the medal, taking just 26 seconds to land Ana Carina PAULOS PEREIRA MONTEIRO (POR) onto her back and shoulders for a 3-0 win.

The gold medal match was an all-Ukrainian affair as Iryna KHARIV CHYKHRADZE faced compatriot Daria MEDVETSKA (UKR). Khariv Chykhradze must have enjoyed the golden feeling that much in Turkey that she was hungry for more as she quickly took the lead before landing the gold winning throw with 59 seconds remaining to claim a second successive Series win.

There was a last-second drama in the semi-final of the women’s 70KG between Lydia PEREZ TOURINO (ESP) and Yuliia KREMEZNA (UKR) as Kremezna came from 2-1 down with less than a tenth of a second remaining to land a 3-point toss. It looked like Perez Tourino had done enough, but as we always say, it’s not over until the sand settles, and she looked shellshocked as Kremezna’s hand was raised. To her credit the Spaniard dusted herself down to take the bronze, defeating another Ukrainian, this time in the shape of Olena NIKITINSKA.

Kremezna came up against Turkey’s bronze medallist the last leg out, Hatice TEKIN, in a bout that could have gone either way until Kremezna landed another 3 points move with 2 seconds to go to win the gold.

With reigning +70KG World Champion and gold medallist in the first leg of this Series Catalina AXENTE (ROU) failing to make it out of the groups, a golden opportunity had opened for another woman to take home the title.

Step forward Liudmyla PAVLOVETS TYCHYNA (UKR), who had lost in the groups to Axente in her opening bout. The powerful Ukrainian took first place and the gold with a win over Noelia LALIN CANDA (ESP) in a dominant display that saw her down her opponent three times in the first minute and a half. Greece’s Stefania ZACHEILA took the bronze with a win over another home crowd hero Cora AYUDE PALLAS (ESP).

In the men’s 70KG division, it was a return to winning ways for one of the Glorious Georgians, back-to-back champ Levan KELEKHSASHVILI, who shook off the disappointment of silver on Sarigerme Beach to smash it in Spain.

The final match with Marwane Ahmed YEZZA (FRA) was a cagey affair, with neither man giving too much away at the start as they sized each other up. It was KELEKHSASHVILI who made the breakthrough with just under a minute and a half remaining and 40 seconds later doubled his advantage. With no more points scored, the Georgian was back on the top step of the podium with another gold for the collection.

Ramiz HASANOV (AZE) picked up his second bronze in two legs of the Series with victory over Carlos ALVAREZ IGLESIAS (ESP).

Azerbaijan’s Omid Abdolali KAMALIAGHDAM (80KG) had taken bronze in Turkey after defeat to Georgian Nika KENTCHADZE and was on a revenge mission as they paired up again in the semi-finals. a mission success case as he overcame his rival this time and advanced to the final, where he found himself 2-0 down to home sand favourite Mohammad Aliasghar MOTTAGHINIA (ESP).

Kamaliaghdam never let it get to him, though and proceeded to mount a comeback, scoring two quick points of his own before downing the Spaniard for a third and final time with only seven seconds remaining to claim the gold. Nika KENTCHADZE kept touch with him in the rankings as he swapped medal colours from the last leg with him picking up the bronze with a win over Pablo GARCIA GARCIA (ESP).

With only five competitors, the men’s 90KG division would be decided by an accumulation of victory points over five rounds. Having failed to progress from the groups in the last leg, it was current 80KG World Champion Davit KHUTSISHVILI (GEO) who came out on top, winning all four of his matches.

His 1st round win over Ibrahim YUSUBOV (AZE) yesterday had finished 0-0 but, due to Khutsishvili being the lighter man, he got the point, and it was this point that was to prove crucial. Yusubov took the home the silver after three wins from four. Dato PIRUZASHVILI (GEO) securing the bronze.

A similar setup was used in the +90kg category, where our four heavyweights battled it out over three rounds to see who the king of the sand in Spain would be. The glorious Georgian World Champion Mamuka KORDZAIA had to settle for silver in Turkey, but the giant Georgian came to re-claim top spot and did exactly that losing only a single point in his three bouts as he swept away the opposition.

Fatih YASARLI had come from nowhere in the Turkish season opener to take home the gold and impressed here again, losing only to Kordzaia on his way to the silver; Carlos ACEBRON HOLGADO (ESP) can be happy with his bronze on his debut in the sandy circle.

It wasn’t just medals handed out for winning matches, there was also the award for top techniques, voted for by the public on the official Instagram channel. Carlos Alvarez Iglesias picked up the prize for the men with a stunning slam and Liudmyla Pavlovets took home the women’s award as she produced a lovely leg sweep to win her match.

In two weeks the World Series returns to Cousteau Beach in Saint Laurent du Var, France. Find out about all other Beach Wrestling events on our Beach Sports calendar