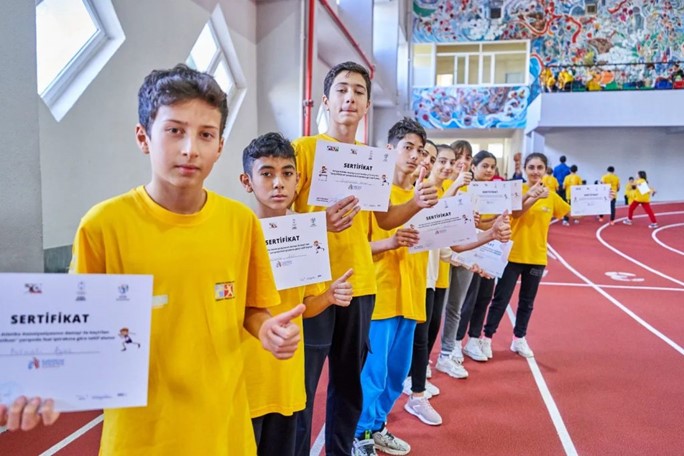 At the final day of the competitions on 3 November NOC Vice-President, the President of the Athletics Federation Chingiz Huseynzada addressed that the OCEP events has been holding since 2019 with support of IOC, EOC, the NOC Azerbaijan as well as the Ministry of Science and Education of the Republic of Azerbaijan. Chingiz Huseynzada, mentioned that OCEP was already known in the world as an Azerbaijani brand, and said that required steps would be taken for further expansion of the project.

In total 18 schools participated in the qualifying stage of the “Children’s Athletics” competitions, with 6 schools in each stage. The two schools with the best results in each stage, as a result, 6 schools went through to the final stage.

Schoolchildren aged between 10 -12 years competed in hurdles events, throwing a ball and other disciplines of sports and at the final stage, the winners were awarded medals, certificates and various gifts, and the winning team was presented with a trophy.

Hilal Salmanov, the Sector Head of the Ministry of Science and Education, Mehman Karimov, Director of the NOC International Programmes Department, Maharram Sultanzada, the Secretary General of the Athletics Federation, and other guests also attended the event.