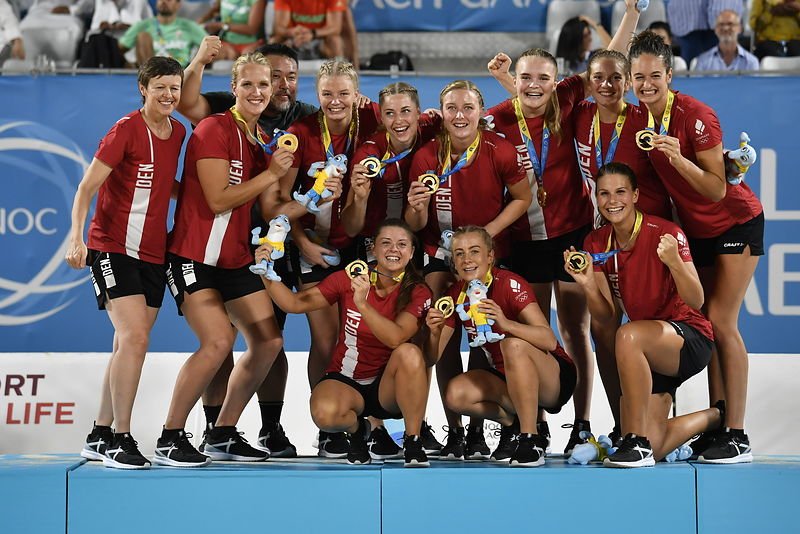 It was a night to remember! With great Beach Handball and amazing moments. As Brazil (men) and Denmark (women) are the very first Beach Handball winners for the ANOC World Beach Games 2019.

Brazil won the crown in the very last shot of an exciting shootout. Before that they managed to stay alive with a golden goal! And Denmark maintained their domination with a last gasp goal!

It was really a night of miracles! World champions Brazil managed to break Spain’s deadlock using Bruno, rather than Gil as the maestro!

The Brazilian scored most of the goals and when the final went into the shootout, Bruno was sensational.

“I have faith in me. Back in 2008 I missed a goal in a same situation. So every time I shoot I remember that,” he said.

As a genuine Brazilian, he asked God to help him. He looked at the sky, kissed his hand and the rest is history.

“I have God by my side in everything I do,” he said.

Sweden won the bronze medal. And broke the hearts of the Qatari people by beating crowd favourite Qatar.

As for the women? History repeats itself. Denmark faced Hungary and won again. Just like in the European Championship final. Just like on 12 October in Al-Gharafa. Denmark has the edge. A kind of momentum.

“When you win against a team, you get the feeling you will win again. The match with Hungary in the preliminary group was a turning point for us,” said Danish coach Holden Mortenf.

When the final finished, he sprinted all the way to the goalpost.

“I regretted it later. I feel so stupid I had to run. I was so tired. But this is the final. And the gold medal,” he quoted.

Hungary lost yet another final. This time at the last second.

Brazil got the bronze medal after an amazing show against Vietnam. “We were disappointed, but we managed to bounce back. I told my players that when you are on the ground, beaten, you have to do something. You have to react. And this is exactly what we did,” said Brazilian coach Marcio Magliano.

Before the final, Brazilians use to dance, cheer, and laugh. Even the coaches of the team took a quick selfie. Probably to remember the moment. After the final it was all about smiles. And alegria. Brazilian style!