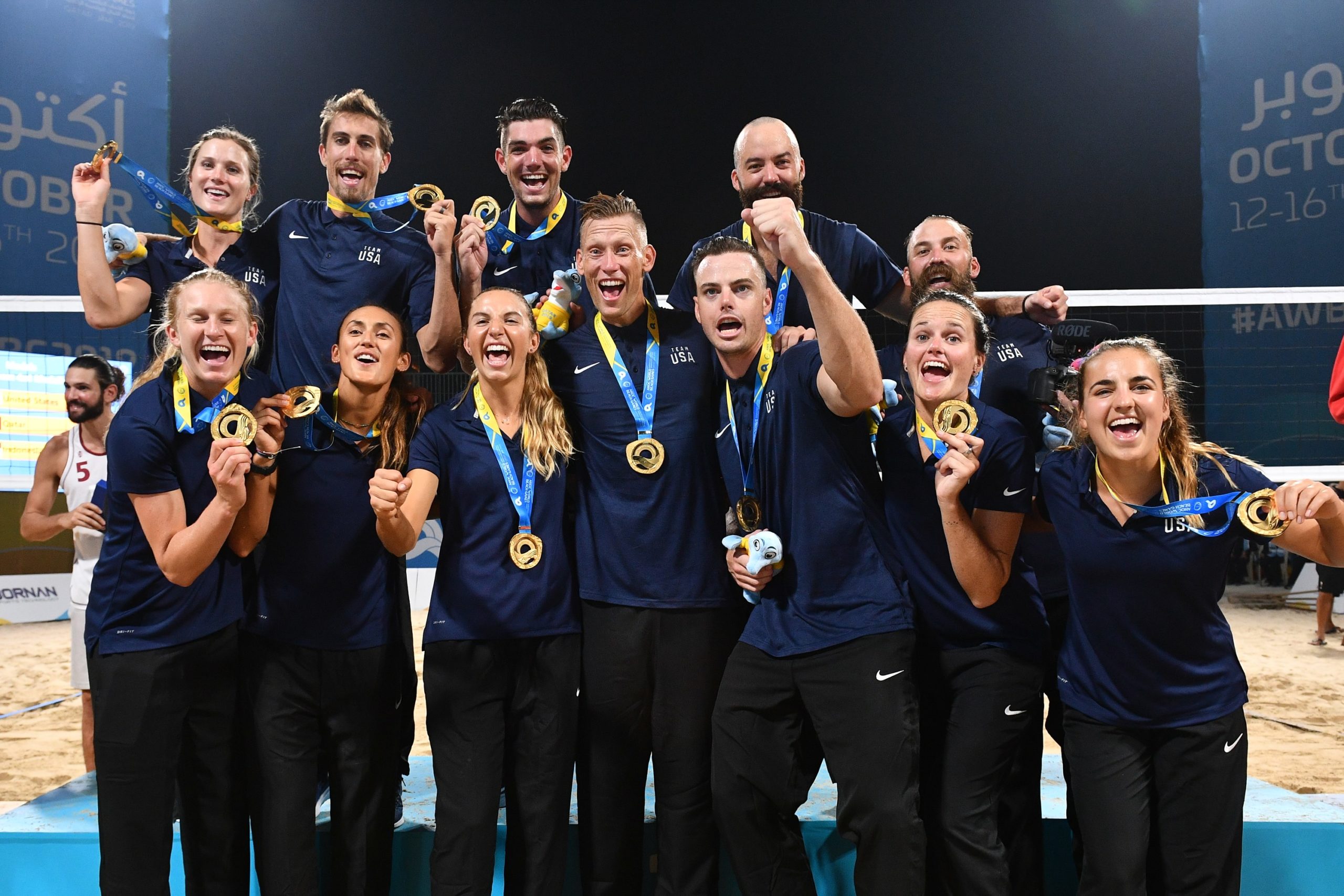 The USA men took Beach Volleyball 4×4 gold on Katara Beach in Doha, beating Qatar two sets to nil, shortly after the USA women beat Brazil to the gold medal by the same scoreline.

4×4 Beach Volleyball is so new at international level that almost no teams competing here have ever played each other in the format; although many here know each other’s game well at the more familiar Olympic 2×2 beach format and often indoors too. Its status as a spectator sport is untested, but on the evidence of this week in Doha, it might have a bright future – even if the veteran hands filling the team captain roles here were often uneasy about leading lineups so untried.

The two gold medal matches were led out by two undercard matches for bronze, both of which had plenty to enjoy. In the women’s competition, Canada v Australia saw the North Americans triumph in three sets with a sparkling third which could have gone either way. Australia nailed the first, starting with a 6-1 lead, helped by couple of big spikes from Stefanie Weiler. But Canada nosed in front in the second with big plays from their big server Camille Saxton. Both teams were wide awake in the final set which Canada just edged out.

The men’s bronze match pitted Poland against Indonesia, two young, tall and well-matched teams. The Polish team had height and power but were a little one-dimensional compared to Indonesia’s more subtle passing play and fluid net work. But the aggressive Poles found another gear in the second set and managed to nudge in front. In the third, Indonesia seemed to surf a wave of confidence, nailing big point after big point. It was enough to see them through, 15-11, in the quickest and most dynamic game on the beach.

The gold medal women’s match looked like a foregone conclusion. Brazil had already thumped the USA in their pool game, and were looking untouchable after their last, almost faultless semi-final. Facing an error count so consistently low, what could the USA do to push ahead?

But right from the gun, something looked odd. Brazil were a little subdued in their opening plays, especially close to the net, and the USA went ahead 11-7 – something no other team had managed against the South Americans so far

The USA worked their height advantage and Geena Urango pulled off some huge blocks; their hitting had improved throughout the tournament and their big plays were landing – right as the imposing figure of Fernanda Berti Alves, Brazil’s talismanic presence at the net, started to collapse. The USA took the first set 21-16, and a dispirited Brazil walked off looking like they didn’t know what had hit them. In the second, some first-class USA blocking pulled back two points, and once again Brazil were behind.

From then on, it was a rout. Everything Brazil tried fell flat, and the USA women had found new levels of punch and accuracy. The boat was sinking, and it took just a few more points. A 21-9 second set, and the USA were the inaugural champions.

The stands were already packed for the men’s gold match: Qatar v USA. Every seat was filled – and every bit of standing room too, in perhaps the noisiest sports match ever seen in this city. After a tetchy first few moments, with the score at 7-8 to the visitors, Cherif Younousse’s first monstrous crosscourt spike on the 15th point saw a roar go round the arena. But the USA seemed more attuned to the big plays, and Younesse’s superweapon was being neutralised.

Perhaps the pressure of being the only home team with a shot at gold had got to Qatar. They seemed tighter, more rigid than they had been all week. The USA looked relaxed, sticking with the same lineup almost throughout. The game was still tight, but two huge blocks in a row pushed the Americans firmly in front, and they took the first 21-18.

Qatar were used to leading from the front, and their number 5, Ziad Benlouaer, was off his game. Both teams traded big points, and Qatar edged in front in the middle of the set, but couldn’t maintain the advantage, and the USA just played on. At 20-20 Qatar saved four match points in a row, but a handful of small errors undid them. The arena fell silent. The USA had gold.

In the end, the USA’s tactical nous and first rate defending paid off; it was enough to keep Younousse back and let Qatar tighten themselves into a corner, but the hosts’ first class play and spirit were a credit to their nation and to the sport. Whatever the future of 4×4 holds, this competition will be remembered as a magnificent introduction to the sport.