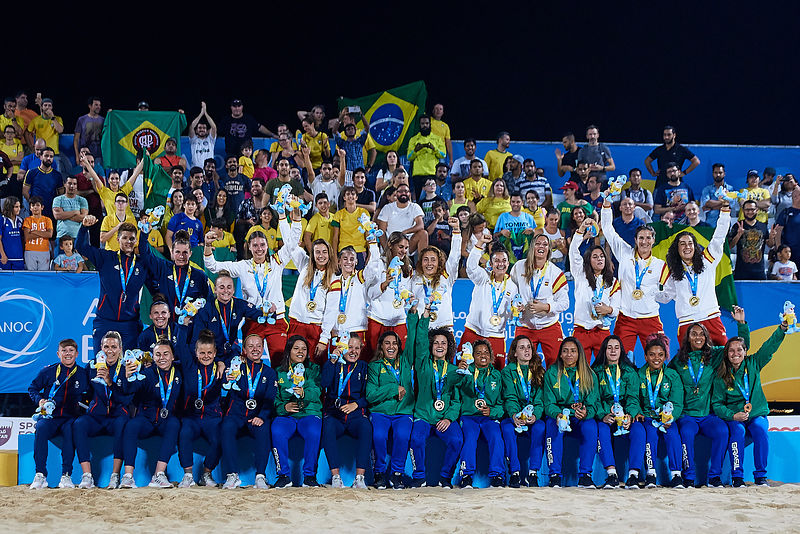 Brazil added another piece of silverware to the cabinet, adding the inaugural ANOC World Beach Games gold medal to their 14 world championships.

Brazil’s skills were fully on display, scoring twice in the first period, and though the Russians pushed them, Maurico Pereira Braz (BRA) took over the game, scoring a hat-trick within one minute to push the lead to five.

Just when it seemed Brazil were going to run away with the match, Artur Paporotnyi (RUS) scored from a free kick and Fedor Zemskov (RUS) added a second a minute later.

But as soon as Russia started to gain some momentum, Bokinha scored a settler for the Brazilians, with a minute remaining in the second period.

Leading 6-2, the Brazilians started to have fun and the party tricks began to come out. Not even a red card to Rodrigo Ribeiro Souto could dampen the mood. Fans and players celebrating early, as only Brazilians do. And why not, when you win the gold medal match 9-3, proving to the world that you are truly number one.

In the men’s bronze medal match, Iran controlled the first half of the match, scoring twice and repelling the Italian attack. Italy was feeling the pressure and raised their intensity in the hope of finding the back of the net.

Their efforts were finally rewarded when their goal scoring superstar, Gabriele Gori (ITA), cleaned up the goalkeeper’s scraps and opened with Italian account in the 18th minute, with a second coming minutes later.

That form continued to start the third period, with Gori scoring 12 seconds in and Dario Ramacciotti (ITA) adding another 15 seconds after that, but a rare mistake from goalkeeper, Simone Del Mestre (ITA) allowed the Iranian captain to grab one back.

Italy pushed it again out to a two-goal lead, thanks to a successful penalty from Alessio Frainetti. But Iran was not dead yet, as Mostafa Kianiharchegani singlehandedly equalising with two successful free kicks with 93 seconds remaining.  And after they couldn’t split in extra time; it was again Kianiharchegani nailing the penalty shot to win bronze for the Iranians.

The slow start, that plagued the Spanish women in their semi-final, was nowhere to be seen in the women’s gold medal match, as they bombarded the British goals. But it was Molly Lacey Clark (GBR) that scored the opener. That lead didn’t last long, with Spain equalising 30 seconds later, through Lorena Del Carmen Asensio, who casually grabbed a second a minute later, and Carmen Fresneda Morga scoring a third for the Spaniards, to end the first period.

An arm wrestle ensued in the second, with the period ending in a stalemate. The 19-minute deadlock was finally broken, with Rebecca Ashleigh Barron bringing Great Britain within one with 8:34 remaining.

Motivated, the British women began to throw everything into it, and thought they finally had the equaliser with four minutes remaining, but Clark’s shot didn’t fully cross the tape. Skills went out the window, as they desperately tried to level the score. But it was to no avail. Europe’s number one team, now the world’s best.

Anna Cherniakova scored early for the Russians, in their bronze medal match, and they continued to press, taking twice as many shots as the Brazilians, but defence was the order of the day.

Brazil began to gain some ascendency as Noele Rocha Bastos won three free kicks in the space of a minute, but the Russian goalkeeper proved why she is one of the world’s best. But even the best can break when pushed too much, with Adriele Rocha Da Silva executing the majestic bicycle kick to perfection, opening Brazil’s account 15 minutes in.

Both teams traded quick goals, but it was Brazil scored twice late in the second period to lead 4-2. Their superior footwork and skills were on display, but it was the Russian captain who scored, cutting the lead to one. This was not enough, as the Brazilians claimed the bronze medal in their first international tournament.

Tournament goal tally was 406 goals, with Gabriele Gori (ITA) top scorer for the men with 13 goals, and Carmen Fresneda Morga (ESP) leading the women with seven.