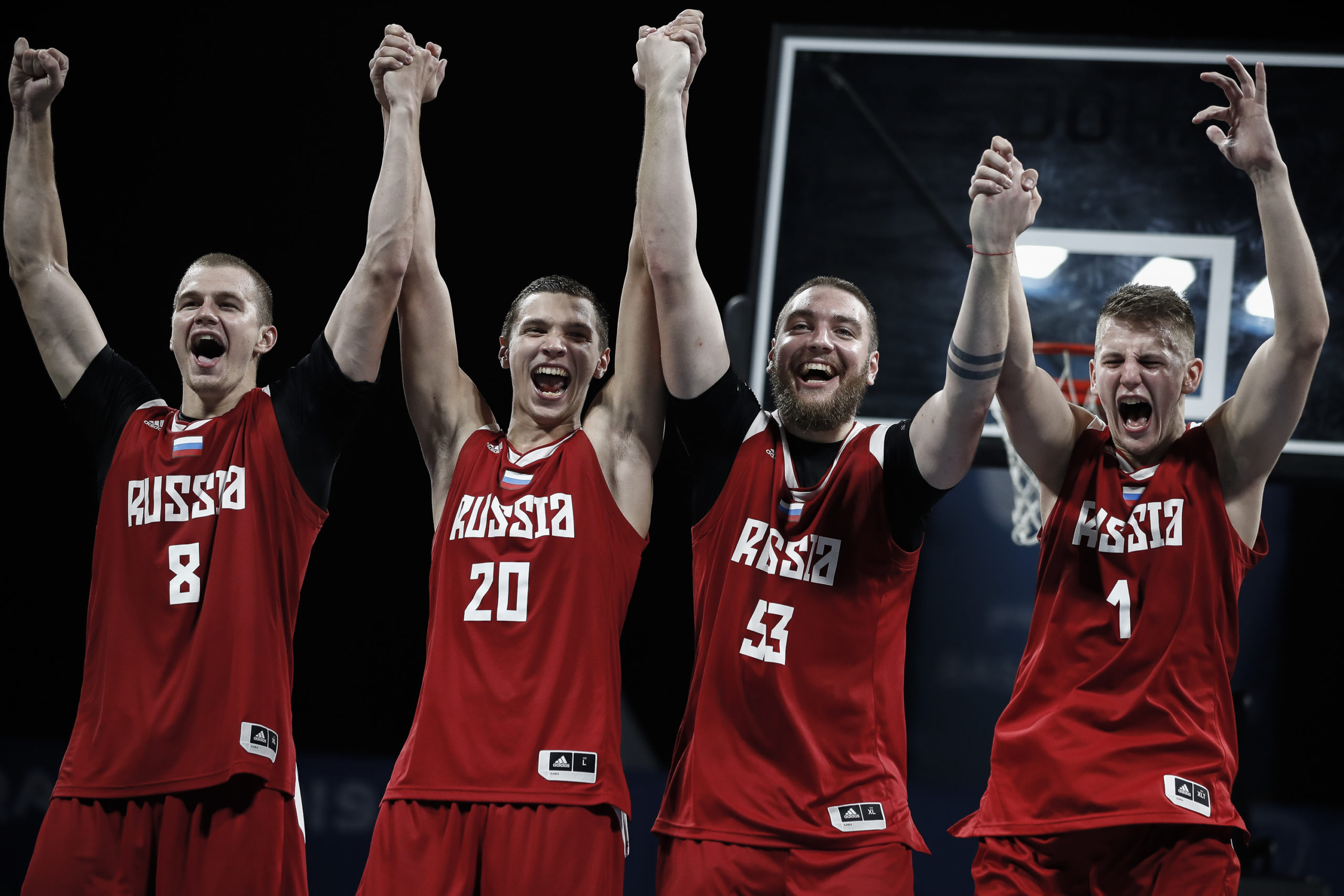 One of the regular dilemmas in sports is what makes the big difference in big games, like finals. Players and coaches usually have to answer to the question “talent and enthusiasm or experience?” But Russia’s men’s 3✕3 Basketball team made it pretty clear in the gold medal game of the ANOC World Beach Games against Brazil, on Wednesday (16 October) night at Katara Beach.

There was nothing regular on the final day of the event, which offered the best matches of the tournament, from the knock-out stage to the finals. Two teams which advanced to the second round unbeaten (women’s USA and men’s China) eliminated in the quarter-finals, while group top-seed Cote d’ Ivoire also lost in the first knock-out match.

Russia defeated Brazil 21-19 in a classic and won the gold medal, behind Dmitrii Cheburkin’s 12-point performance! Cheburkin led his team to the title, proving that his No 3 Individual FIBA World Ranking for U23 played tells the truth.

His teammate, Daniil Abramovskii, who is in the fourth place of the same elite list, added five points on the scoreboard and quoted: “Gold was our goal from the beginning, as we came to Doha to win it all”. Abramovskii also revealed that he and his teammates play together for many years. “We played for five years in 5✕5 competitions and now we are in the 3✕3. It means a lot that we can keep getting better and at the same time being able to win more medals.”

Russia beat Cote d’ Ivoire 17-15 in the quarter-finals and Mongolia 21-8 in the semi-final, while Brazil reached the final after wins over Slovenia, 18-10 in the first elimination game and Ukraine 14-13 in the semis.

Mongolia – which defeated unbeaten China in the quarter-finals – won the bronze medal, as they edged past Ukraine 20-16 and the winners’ star, Anand Ariunbold said: “Mongolia is trying to build a tradition in 3✕3 Basketball. Winning a medal in a great event like the ANOC World Beach Games is big for our country.”

In women’s competition, the medal day started with Brazil upsetting the big favourite, USA 14-12 in overtime, after Vitoria Maria Domingos’ off the glass and double-bounced two-pointer! Brazil’s dream for gold, though, ended in the semi-final against France. France’s 13-8 victory led the European team to the final, where they defeated Netherlands 15-9! The French leader, Johanna Morgane Muzet, explained: “Despite playing all four of us for the first time together, we learned how to adjust in one another’s style of play and it totally worth it. We had a meeting before the final and we knew that hustle and execution would be the keys to success.”

China, which had lost to Netherlands 16-15 in the semi-final, beat Brazil 17-13 to claim bronze medal! Chinese guard, Hamei Wang, explained that “losing in the semi-final mostly motivated us, rather than disappointed us. Brazil is a great team and that was well-proved after they beat USA in the quarter-finals.”