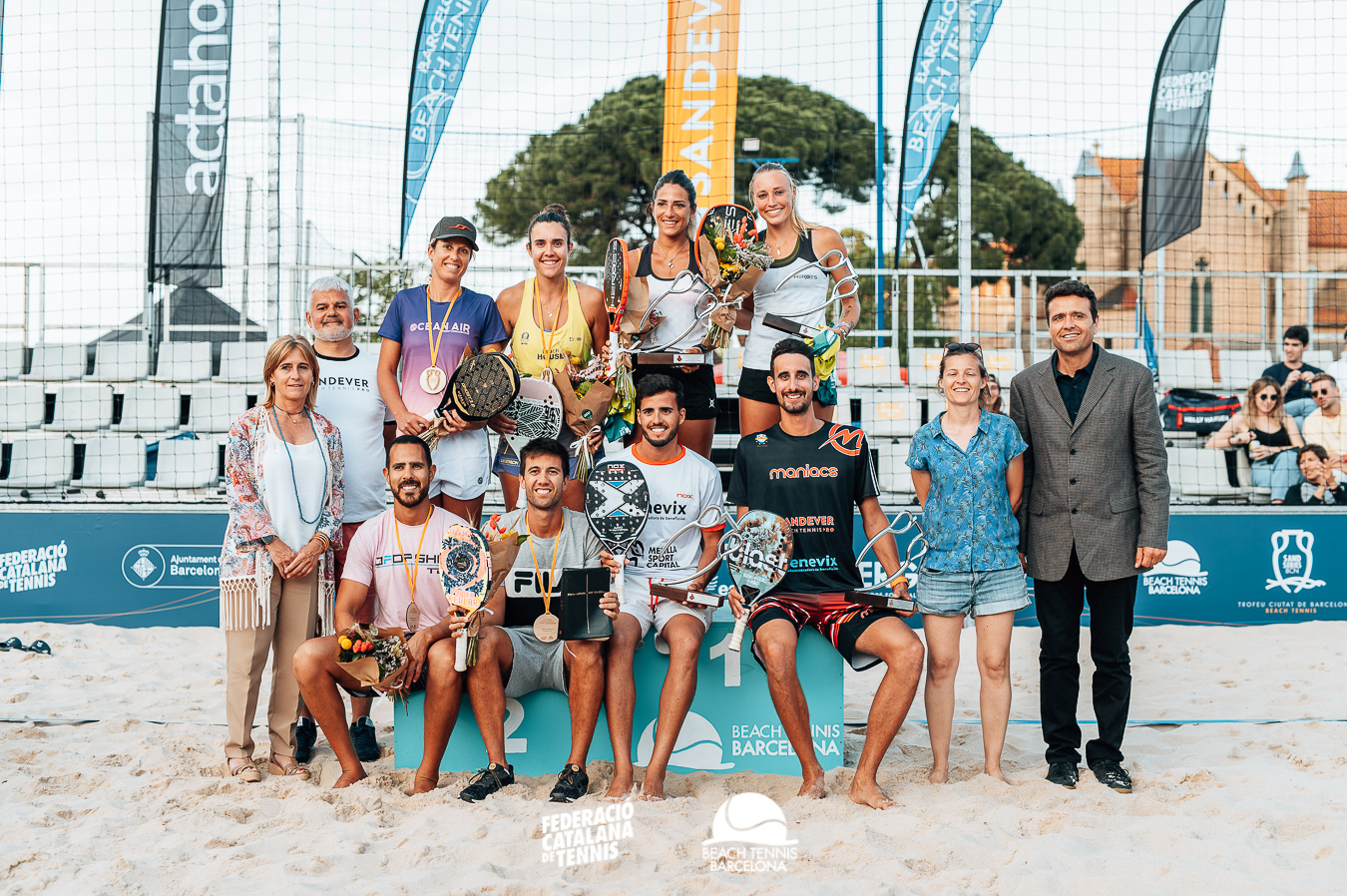 GASPARRI-VALENTINI DOMINATE THE SECOND AND THIRD SAND SERIES OF THE SEASON IN THE WOMEN’S EVENT, WHILE SPOTO-GIANOTTI COME OUT VICTORIOUS IN GRAN CANARIA AND CAPPELLETTI-RAMOS IN BARCELONA

Spain’s beaches hosted in May the second and third leg of the Sand Series, which was first launched in 2021 offering the highest prize money and ranking points on the ITF Beach Tennis World Tour. After the 2022 opener on the Plage Des Brisants in Réunion Island, the Beach tennis Sand Series continued in Gran Canaria on 20-22 May at the Playa de Las Canteras. The CEM Vall d’Hebron staged the inaugural Sand Series Barcelona, held from 26 to 28 May.

It was business as usual for the top seeds on the Playa de Las Canteras with Giulia Gasparri, Ninny Valentini, Mattia Spoto and Nicolas Gianotti extending their win streaks and further staking their claims as the standout teams on the ITF Beach Tennis World Tour this year.

Gasparri and Valentini continued their strong run of form, picking up their third title of the season and first Sand Series crown after losing their first three finals in Saarlouis, Brasília and Réunion earlier this year.

After overcoming a tight encounter against Sophia Chow and Patricia Diaz in the quarter-finals, the pair romped to victory with two straight set wins against their Brasilia conquerors Vitoria Marchezini and Marcela Vita in the semi-finals before repeating their BT400 Balneário Camboriú triumph over Flaminia Daina and Rafaella Miiller in the final.

Gasparri said: “Flaminia and Rafa are one of the best teams in the world and are a very strong team. It was the perfect week.” The win also culminated with Valentini joining Gasparri at the top of the ITF Beach Tennis rankings for the very first time and will head into the Sand Series Barcelona on a ten match winning streak, having reached at least the final of all six events they have played this year.

Meanwhile, the French-Italian pair Spoto and Gianotti decimated the field culminating in a win against defending champions Michele Cappelletti and Antomi Ramos. The pair have looked imperious all week, barely dropping games let alone sets as they made it 18 wins in a row on the ITF Beach Tennis World Tour, adding to their Sand Series Brasilia Classic title from last year.

“We were tactically perfect,” said Gianotti, who had never previously advanced beyond the second round in Gran Canaria. Spoto added: “We played an incredible match. They started to play better in the second set, the luck was changing so I’m very happy.”

Cappelletti and Ramos had also enjoyed smooth passage to the final, reaching the championship match without dropping a set, but the French-Italian pair proved too much for them as they fell 6-0 6-3. The Beach Tennis elite face a quick turnaround as they now head to Barcelona for the latest chapter of the Sand Series, where play gets underway on Thursday.

The Sand Series consists of the premier tournaments in the ITF Beach Tennis World Tour. Designed to provide the top players with opportunities to gain more ranking points and more prize money. In addition to the Gran Canaria Classic, the Series will see the return of three more Classic tournaments in Réunion, Brasília and Saarlouis with Barcelona and Viareggio joining the series destinations.

Michele Cappelletti and Antomi Ramos got back to winning ways on Saturday with victory at the inaugural Sand Series Barcelona event. The duo put back-to-back finals losses from BT400 Balneário Camboriú and Sand Series Gran Canaria behind them by winning at the CEM Vall d’Hebron, stringing together a stellar championship run without the loss of a set.

However, they were severely tested in the final, having to come from a breakdown in the opening set to secure victory against Allan Oliveira and Thales Santos. The Brazilian duo were riding high after overcoming Nicolas Gianotti and Mattia Spoto in a titanic quarter-final that saw them overturn a set and a break deficit to triumph in an 11-9 match tie-break, snapping the pair’s 20-match winning streak in the process. Spoto will take solace from the weekend though as, on Monday, he clinched the world No. 1 ranking for the first time.

“We have played and lost a lot of finals recently, so this win is very special,” reflected Cappelletti. The pair will now head to Brazil for three big weeks with upcoming BT400 tournaments in Valinhos and Uberlandia ahead of the Sand Series Brasilia Classic.

Meanwhile, Giulia Gasparri and Ninny Valentini made it two out of two in Spain this month as they notched their third victory in a row against Rafaella Miiller and Flaminia Daina. The pair have been in formidable form of late and have not lost a match since their epic Reunion final encounter against Miiller and Patricia Diaz.

Miiller and Daina headed into the final having squeezed past Sophia Chow and Diaz in the quarter-finals before a routine win against the Brazilian pair of Vitoria Marchezini and Marcela Vita. However, they came up short in the final against the red-hot Gasparri and Valentini, who have now won 15 matches in a row.

After back-to-back Sand Series events, there will not be long to wait for another with the Sand Series Brasilia Classic getting underway in June.